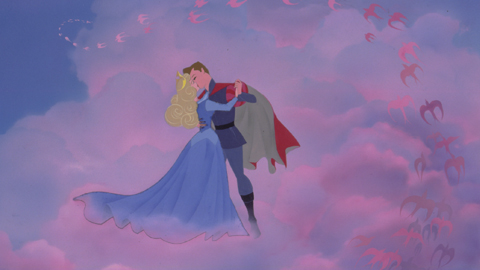 The final page of the book, featuring the dancing Sleeping Beauty and Prince Charming, was bound into the back of the book. Image courtesy of the Disney Archive.

Walt Disney's animated movie Sleeping Beauty (1959) begins with a live action shot of a spectacular gold-plated book adorned with jewels. As the narrator reads the opening lines, the camera pans in on the colorful paintings, and the viewer is soon transported to a far away land.

The background scenes of the animation were the work of legendary illustrator Eyvind Earle, who also executed the original paintings in the book. Although it cost $1,500 to produce, the book was, after all, a movie prop and not intended to last forever. After 50 years the paper was cracking and tearing.

Enter Marieka Kaye, an exhibits conservator at The Huntington. She helps care for the more than 8 million books and manuscripts in the Library's collection. Rebecca Cline, director of the Disney Archive, turned to Kaye last year for help in extending the life of the iconic storybook. 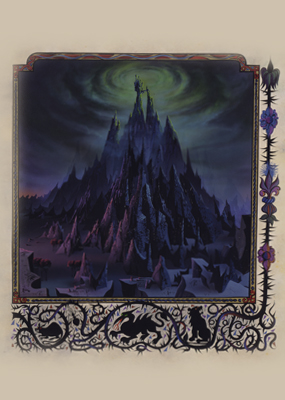 For the illustration of Maleficent's castle, Marieka Kaye used an adhesive to repair the chipping of the carbon-based paint. Image courtesy of the Disney Archive.

Last month Cline returned to the lab with John Turchetta, host of the "Armchair Archivist," a program of D23, the Official Disney Fan Club. In the show, Kaye explains why the brittle paper broke so easily and what solution she came up with to preserve the pages. She also reveals one of her favorite techniques for restoring chipped paint. With a tiny brush and magnifying glass, she applied an adhesive made by boiling a Japanese seaweed called funori and diluting the concoction with water.

She also shows what she did to repair the chipped binding. "The spine was covered in gold foil and almost looked like a candy wrapper," said Kaye. "It wasn't holding up to the test of time."

You can view the eight-minute video about Kaye's conservation work on D23's website or on YouTube. You can also download the show from iTunes (the episode dated March 8, 2011). Although it documents a one-of-a-kind assignment for Kaye, it captures the kind of work that takes place in the conservation lab on a daily basis.