LECTURES | The Fruits of Their Labors 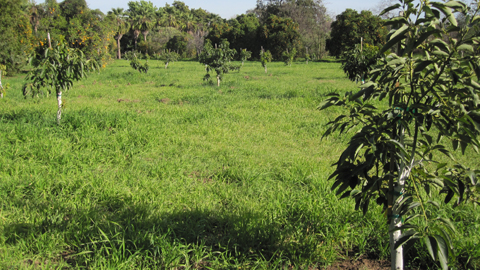 A section of the Ranch includes a new heritage orchard of avocados, including 33 different cultivars. (It is called the Shepherd-Brokaw collection in honor of the Brokaw Nursery and Jack Shepherd, who donated the archive of the California Avocado Society to The Huntington.) Photo by Scott Kleinrock.

Carl Stucky and Julie Frink know a thing or two about avocados. Stucky has been around avocados for more than 40 years and is now an agricultural consultant and farm manager of six commercial orchards in and around Carpinteria. He is a member of the board of directors of the California Avocado Society, and he also is a past president of the organization. Frink has decades of experience, too, having long volunteered at the University of California South Coast Field Station in Irvine, a 200-acre research facility that includes more than 150 varieties of avocados.

At The Huntington's next Second Thursday Garden Talk & Plant Sale, you can listen to the pair share tips on selecting, growing, and caring for avocados in the home garden. Some of Frink's advice will be inspired by her experience tending to the trees in her own yard in Huntington Beach, where she has no fewer than 20 varieties by her last count.

One of Frink's tasks at the Irvine Field Station was to create a database that eventually listed more than a thousand avocado varieties. But chances are you will find just one type available at your local grocery store—the Hass avocado. It was named after Rudolph Hass, who patented the variety in 1935; it was then widely propagated and distributed by Brokaw Nursery of Whittier. All Hass trees today can be traced back to that tree in Rudolph Hass's yard. 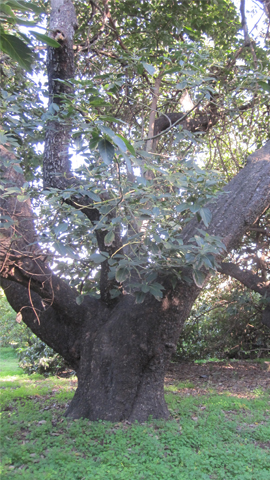 Several avocado trees on the Huntington grounds date back to the early 20th century. Photo by Scott Kleinrock.

How did the variety become so popular? "It has a long life on the tree," explains Stucky. While you might have about 3 days to harvest a fruit like cherries, Hass avocados can hang on the branches for a couple months after they are ready to eat. The thicker skin, too, makes the variety more durable for packing and shipping. In time, the variety came to dominate the market, supplanting the Fuerte. Now avocado orchards from the warmer climates of San Diego County to the cooler environs of Santa Barbara County tend to grow it as their crop of choice.

But that doesn't mean the Hass suits every taste. Frink and Stucky will talk about other favorites, such as the Reed or Pinkerton. The history of the avocado in California can be traced by stories about the commercial choices between one variety over another. In fact, The Huntington now prides a modest heritage orchard of 33 distinct cultivars, which represent the history of the avocado industry in the 20th century. The small trees (photographed above) are now growing in a section of The Huntington that still includes a few acres of Henry Huntington's original orange grove, not to mention some massive surviving avocado trees. The old and the new trees are part of The Huntington's Ranch project. Last year, Stucky was part of the team that helped graft the cultivars onto root stock provided by the very same Brokaw Nursery (now of Saticoy) that first put the Hass avocado on the map.

The Garden Talk takes place Thursday, March 10, at 2:30 p.m. in Friends' Hall and will be followed by a trek to the nursery for a plant sale. You can mark you calendars for future Second Thursday Garden Talks & Plant Sales: On Thursday, April 14, Clair Martin, the E. L. and Ruth B. Shannon Curator of the Rose and Perennial Gardens at The Huntington, will discuss sustainable rose gardening. On May 12, historian Andrea Wulf will give a talk called "Founding Gardeners: The Revolutionary Generation, Nature, and the Shaping of the American Nation." And on June 9, Tom Spellman, a veteran of the nursery business, will discuss the 12 most important antioxidants from your garden.