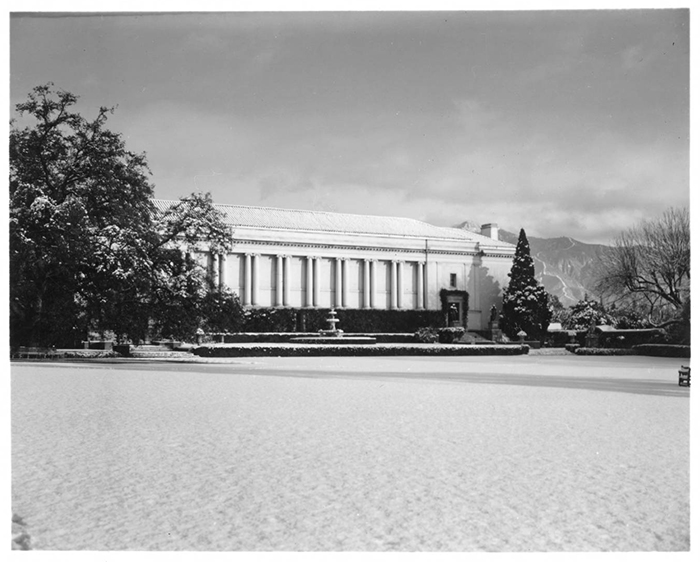 The Huntington grounds south of the Library after snowfall. (Jan. 11, 1949)

To get in the mood for the winter holiday season, take a gander at The Huntington’s snows of yesteryear (1932, 1948, and 1949) as captured in a remarkable collection of photographs available through our digital library. According to the Los Angeles Times, the largest snowstorm to hit Southern California in the 20th century started on Jan. 10, 1949, and lasted for three days. Flakes dusted rooftops and lawns along the coast, a foot of snow trapped a score of cars in Laurel Canyon, and cross-country skiers schussed their way down Altadena’s Christmas Tree Lane. Frosty winds spread icy conditions across major highways, resulting in the jingling of tire chains and several closures. Pasadena and its environs took on a mantle of white. The Rose Bowl looked like “a dishpan full of milk,” according to one observer, and children threw snowballs at cars and each other. As photographs attest, the storm transmuted the grounds of The Huntington into a winter playground, luring dapperly dressed staff members outdoors to shape huge snowballs and build snowmen. 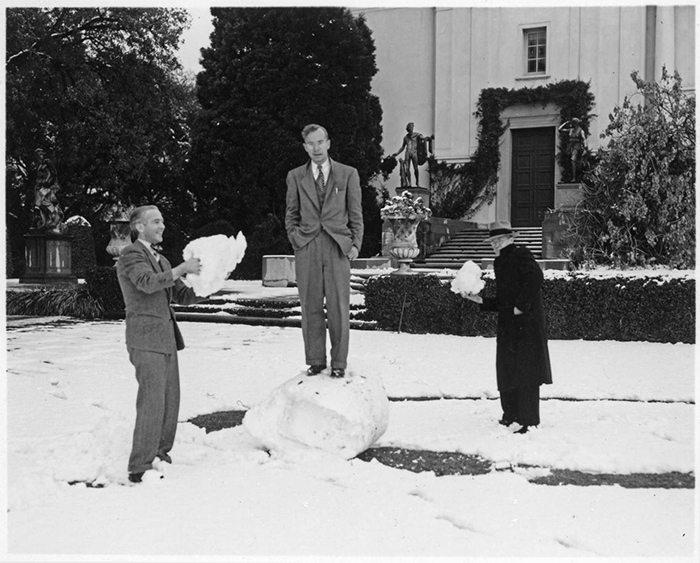 But the impact of the unusually cold weather was not all fun and games. Nighttime temperatures plummeted into the 20s, destroying citrus crops in the San Fernando Valley and inflicting serious damage on The Huntington’s botanical gardens. The Huntington Library’s 22nd annual report, published in 1949, describes the harsh weather’s destructive effects:

One of the purposes of the Botanical Gardens is to discover which sub-tropical plants will grow out of doors in Southern California. The past winter provided the severest test such plants have had to endure. The results are interesting but disturbing. Among the complete losses were the citrus and avocado crops, 350 cacti or succulents, over 200 other plants, and some entire blocks of planting, such as Ficus, Acacia, Eucalyptus. Much damage was done to flower buds, leaves, branches, stalks and canes, so the growth was retarded. That 10 to 12 truck-loads of debris were carted away daily during the cleaning up in the spring shows the extent of the damage. 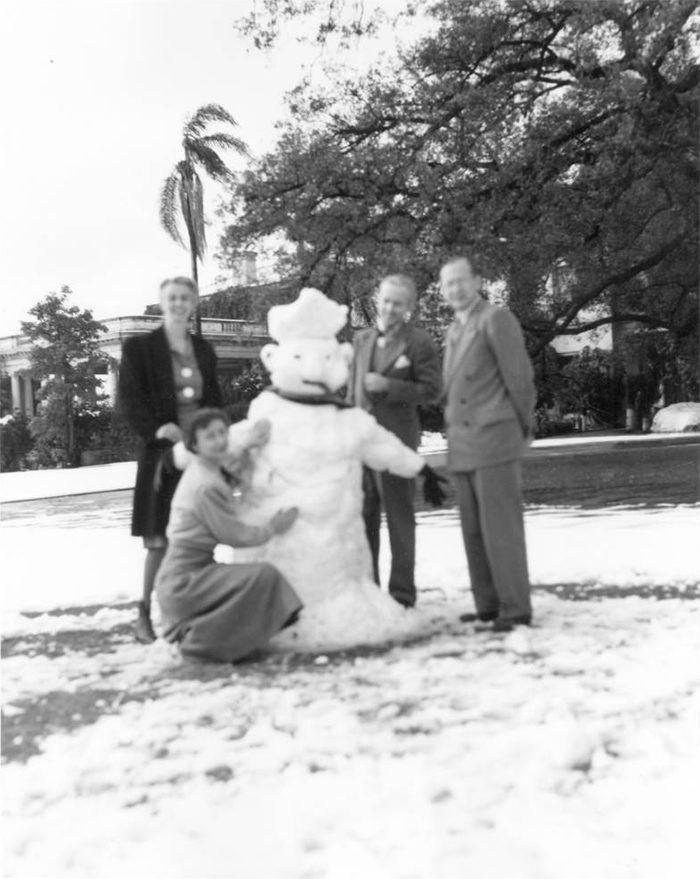 A later annual report mentioned that a snowstorm in 1948 had brought about the demise of The Huntington’s wooden lath house—the first building constructed on the grounds to display semi-tropical plants—as well as its rebirth in a different guise:

The snowstorm of 1948 demonstrated how fragile the lath house had become and, being beyond repair, it was replaced by a new structure of aluminum. This is already filled to capacity with new plants developed in the propagating department. 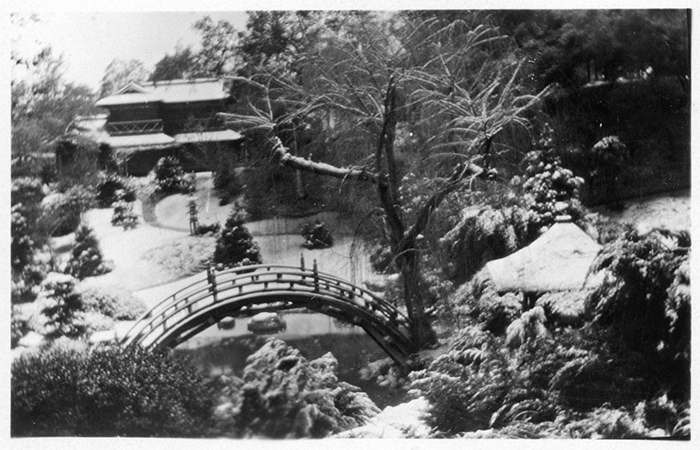 Back on Jan. 16, 1932, the Los Angeles Timesreported that a gentler snowstorm had annoyed Albert Einstein and his wife Elsa during a return visit to Pasadena, where Albert spent time discussing cosmology with his peers at Caltech. Elsa complained to a reporter that they had left Germany for sunshine and had plenty of snow back home. The 1932 snowstorm blanketed the wisteria pergola, moon bridge, and teahouse in The Huntington’s Japanese Garden, as well as the lawns behind the Library and alongside the Huntington residence, which today is the Huntington Art Gallery. The sight of a bearded palm tree towering above footprints in the snow reminds us that The Huntington can become a place of astonishing incongruities when the weather conditions are just right. 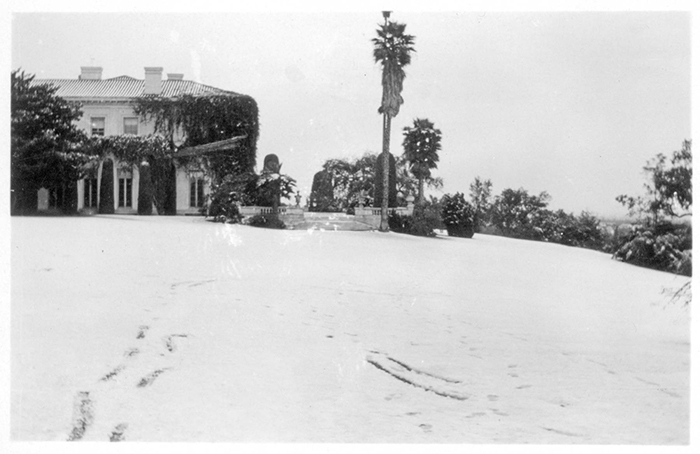 Snapshot of the west façade of the Huntington residence and the south terrace after a rare southern California snowfall. (Jan. 15, 1932)