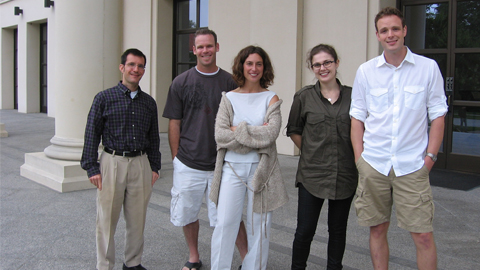 School's out, which means most doctoral candidates are busy researching, writing, and revising their dissertations. Five lucky graduate students got a master class last Saturday at The Huntington in the sixth annual Western History Dissertation Workshop, organized jointly by five of the nation's premier programs for the study of California and the West.

The structure was simple. After applying and gaining acceptance to the workshop, the grad students circulated one chapter each in advance and then took turns on Saturday summarizing their dissertations and subjecting themselves to probing questions and sage advice from some of the most noted historians in the field, including a Pulitzer Prize winner and a recipient of a MacArthur "genius grant."

"It's like carpenter talk among a room full of carpenters," explained Jon Christensen, the executive director of Stanford's Bill Lane Center for the Study of the North American West. "It's the kind of conversation you wouldn't necessarily share with your readers, but we can have it with each other."

Christensen and Lane Center co-director Richard White led the critique of Ruth Morgan's dissertation, which dealt with the historical perceptions of the changing climate in southwest Western Australia. Morgan had traveled to the workshop all the way from the University of Western Australia, expanding the bounds of the group's definition of "the West," but providing plenty of common ground for a lively discussion about water, environmental history, and risk management.

Emmanuelle Perez, too, was proof of the reach of western history in today's academy. Hailing from the École des Hautes Études en Sciences Sociales, in Paris, she studies the evolution of California's political culture from 1820 to 1870. John Mack Faragher, director of Yale's Lamar Center for the Study of Frontiers and Borders , went through her chapter with a fine tooth comb while the other four students listened intently. Praising her choice of subject, he encouraged Perez to engage more fully with the existing historical literature in the field, noting Louise Pubols' recent book, The Father of All: The de la Guerra Family, Power, and Patriarchy in Mexican California, as the elephant in the room. "You cite her," he said, "but you don't really address the big picture that she invites us to consider." Perez nodded knowingly, later admitting the mix of admiration and disappointment she experienced when she first picked up Pubols' book. "It was so close to what I wanted to do."

Steven Aron, professor of history from UCLA and director of the Institute for the Study of the North American West at the Autry National Center, offered some universal encouragement before giving his assessment of Miles Powell's chapter about perspectives of species extinction in the late 19th century and early 20th century. "If you don't have a crisis of faith at least once during your research," he said, "then you aren't working hard enough." His colleague from the Autry, Virginia Scharff, also a professor of history at the University of New Mexico, walked Powell, who's from UC Davis, through some of the ways he could flesh out detail or clarify his argument.

Most of the feedback, though, came in the form of the nuts and bolts that Christensen had called carpenter talk. Historians Alan Taylor and Louis Warren of UC Davis offered constructive advice to Todd Holmes, whose Yale dissertation will detail how the strikes and boycotts of Cesar Chavez and the United Farmworkers Union caused shifts in party politics and the political economy of the 1960s and 1970s. Bill Deverell, director of the Huntington-USC Institute on California and the West, rattled off specific archive collections that might prove valuable to Zevi Gutfreund's research about the history of bilingual education in California.

But good scholarship does not begin and end with the archival equivalent of a mother lode. Richard White offered a cautionary tale. "What would have happened if Donald Worster had written his recent biography of John Muir using only Muir's written texts?" Worster's excellent book, A Passion for Nature: the Life of John Muir, would be familiar to any first-year graduate student, and White's point was clear—historians have to immerse themselves in multiple and diverse primary sources in order to give context to any single person's original writings.

By the end of the day, the students had much to think about. "It was very different from a conference, where you give a prepared presentation for just 20 minutes, and people respond on the spot," said Ruth Morgan. "The feedback was vastly more specific today—and thoughtful. Those different perspectives will contribute to better products in the end."