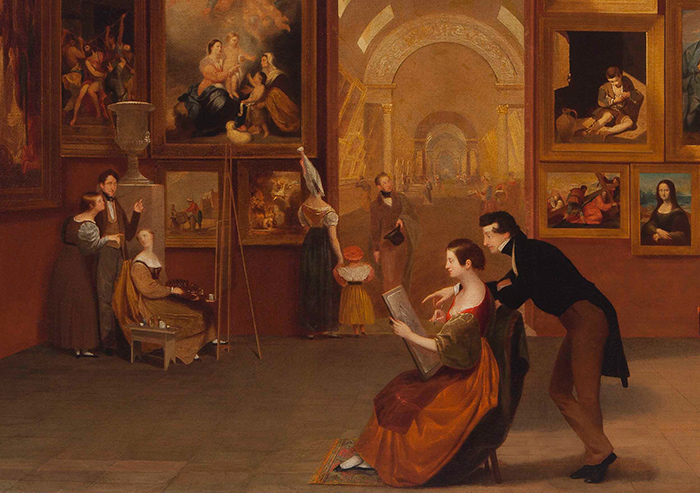 Morse painted biographical information into his monumental work. He depicts himself leaning over his daughter sketching in the foreground; friend and author James Fenimore Cooper stands in the corner at left with his family; and Morse's roommate in Paris, American sculptor Horatio Greenough, strides into the gallery holding his hat. Detail of Gallery of the Louvre, Terra Foundation for American Art, Chicago.

What’s the connection between Morse code and The Last of the Mohicans? It turns out that their creators were good friends, and one depicted the other in a monumental painting on display in “Samuel F. B. Morse’s Gallery of the Louvre and the Art of Invention” through May 4, 2015.

Before Samuel F. B. Morse became famous for his work on the single-wire telegraph system and Morse code, he swelled with ambition to become a great painter, one to rival Raphael and Michelangelo. Attempting to secure his artistic reputation, he began painting Gallery of the Louvre in 1831 while living in France (the work was completed in 1833). In the painting, he reproduced famous works by Leonardo, Rembrandt, Rubens, and Titian, among others, arranged in a fictitious installation in the Musée du Louvre in Paris.

Morse also depicted in the painting several noted people, including himself and his daughter in the foreground and, close to the left side of his six-by-nine foot canvas, the popular author James Fenimore Cooper standing behind his seated daughter, Susan Fenimore Cooper, and his wife, Susan DeLancy Fenimore Cooper.

Why did Morse choose to paint Cooper, the author of such quintessential American novels as The Pathfinder, The Pioneers, and The Last of the Mohicans—novels set in romantic and roughhewn American wildernesses and frontier lands? And in the Louvre museum’s elegant Salon Carré, no less, flanked by his fashionably dressed family? 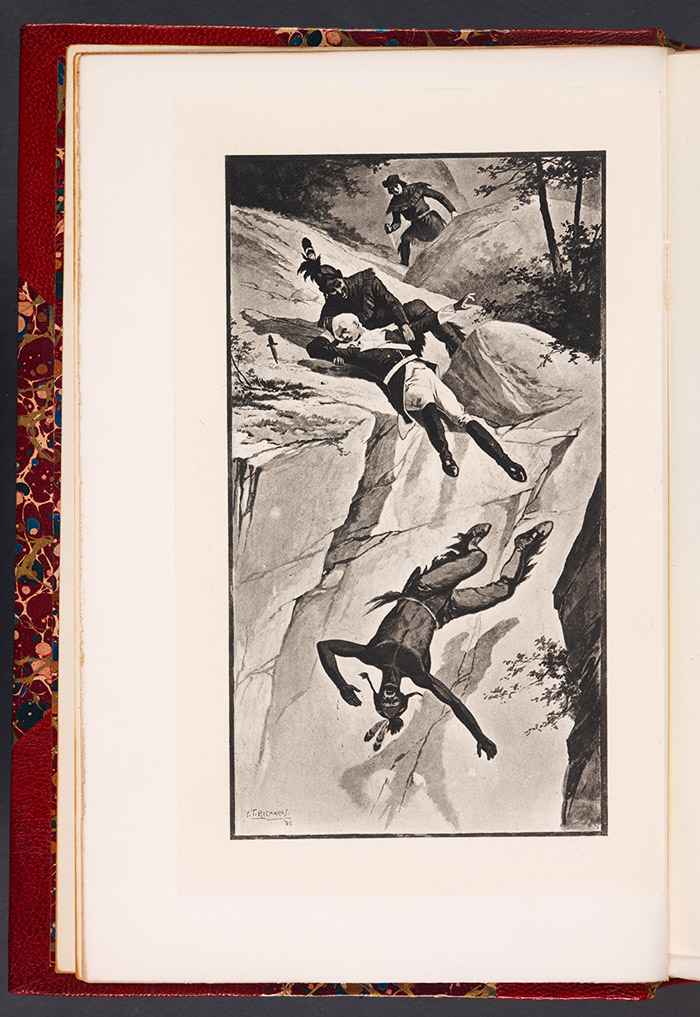 The connection lies in the friendship between Morse and Cooper, who both belonged to the Bread and Cheese Club, an artistic and literary circle that Cooper started in a New York City bookstore owned by his publisher. It turns out the two men also belonged to another club of sorts, along with American sculptor Horatio Greenough, who appears in Gallery of the Louvre to the right of the Coopers, holding his top hat in his hand. (The Huntington has Greenough’s sepia-on-paper Silhouettes (1831) among its art holdings.)

In an essay in Samuel F. B. Morse’s “Gallery of the Louvre” and the Art of Invention, the book that accompanies The Terra Foundation’s visiting exhibition of Morse’s painting, Wendy Bellion, associate professor of art history at the University of Delaware, writes:

“In Europe, with Greenough, they [Morse and Cooper] forged what I would call ‘the Sculpture Club’—their friendship cohered around experiences of imagining, making, and writing about sculpture . . . Along with Cooper, Morse and Greenough shared a robust friendship grounded in their identities as artists abroad and as Americans committed to advancing the arts in the United States.” 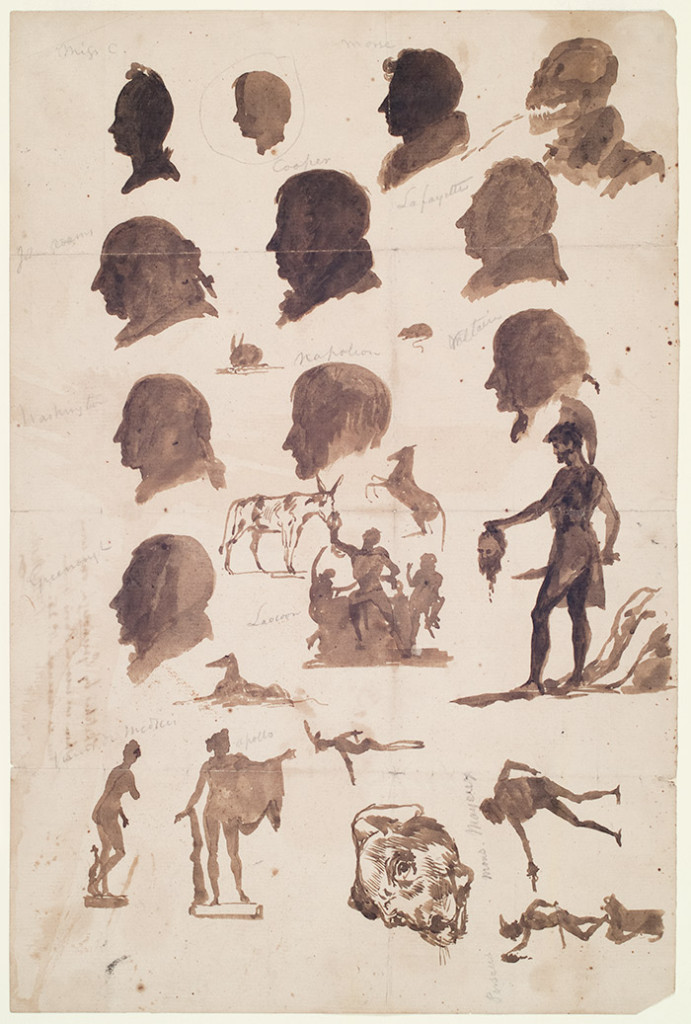 As a testament to their close friendship, Morse wrote to Cooper upon his return to New York in 1833, urging him to come back to the States: “Come home in the spring, do. Mr. dear Sir, you are wanted at home; I want you, to encourage me by your presence.” Morse goes on to allude to Cooper’s novel The Pioneers when he writes: “I find the Pioneer business has less of romance in the reality than in the description, and I find some tough stumps to pry up, and heavy stones to roll out of the way, and I get exhausted and desponding, and I should like a little of your sinew to come to my aid at times, as it was wont to come at the Louvre.”

The Huntington Library has an assortment of items related to Cooper, including manuscripts, letters, and all editions of his major works (including The Pioneers and The Last of the Mohicans), some of which are in their original bindings. In addition, the Library holds illustrations from some of his most famous works.

It is fitting that this traveling exhibition should make a stop at The Huntington, where items related to three American friends—artists whose friendships were sealed in France and honored in Morse’s painting—are reunited for a while in the mind’s eye.