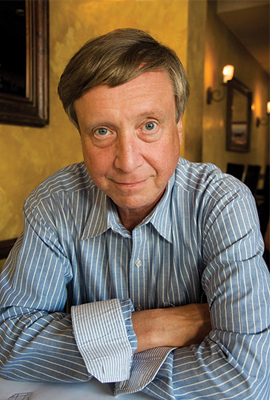 "Sean Wilentz," says Robert C. Ritchie, The Huntington's W. M. Keck Foundation Director of Research, "is one of our country's leading interpreters of 19th-century American history." You can judge him for yourself on Monday night when Wilentz delivers a lecture titled "'Let There Be No Compromise': Lincoln, Slavery, and Democracy in the Secession Crisis."

Wilentz is The Los Angeles Times Foundation Fellow at The Huntington for 2010–11 and has been researching a new project about Presidents Andrew Jackson, Abraham Lincoln, and Ulysses S. Grant. The professor of history from Princeton University has been a prolific author since publishing his first book in 1984, Chants Democratic: New York City and the Rise of the American Working Class, 1788–1850. In the past half-dozen years alone, he has published Andrew Jackson (2005), The Rise of American Democracy: Jefferson to Lincoln (2005), The Age of Reagan: A History, 1974–2008 (2008), and Bob Dylan in America (2010).

Those last two books may fall outside the 19th-century range that Ritchie described in his effusive praise for Wilentz, but they illustrate an author's appetite for diverse subjects and his desire to write for a broad audience. He grew up admiring Arthur Schlesinger Jr., who wrote massive books about presidents as varied as Andrew Jackson, Franklin Delano Roosevelt, and John F. Kennedy. As a boy, Wilentz also soaked up the atmosphere of his family's bookstore in Greenwich Village, where writers like Irving Howe and, yes, Bob Dylan were held in equally high esteem.

The wide open approach served him well when he set out to write his magnum opus, The Rise of American Democracy, a thousand-plus-page book that Wilentz started in earnest after becoming immersed in the Clinton impeachment trial. His active role raising constitutional objections crystallized many ideas for his study of 19th-century democracy. "I got to see politics operate in Washington as I wouldn't have otherwise," he recalls, "and I came away more impressed than appalled. I understood a lot more."

While you hardly have time to read that book as background for Wilentz's lecture, it does seem to be a natural place to start as you plow through reading options for commemorating the sesquicentennial of the Civil War. In summarizing the book that proceeded, in effect, from one revolution to another, Wilentz noted, "The biggest irony, I think, in American political history is that a political system designed by its architects to keep the slavery issue out of national politics ended up making slavery the only issue in national politics in the 1860 election."