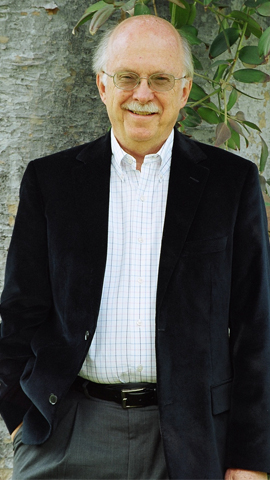 Today we mark the 150th anniversary of Abraham Lincoln's First Inaugural Address. In a way, the commemoration kicks off the sesquicentennial of the Civil War. For the next four years, historians will note the 150th anniversaries of everything from the attack on Fort Sumter (April 12, 1861) to Lee's surrender to Grant at Appomattox (April 9, 1865).

Lincoln biographer and longtime Huntington research fellow Ronald C. White Jr. is in Washington, D.C., to mark the occasion. Today he will give what he calls the "back story" to the First Inaugural Address at a luncheon at the New York Avenue Presbyterian Church, where Lincoln attended services during his presidency. White also contributed a new essay today for the website of National Public Radio—"150 Years Later, Lincoln's Words Still Resonate."

White won plaudits in 2009 for his book A. Lincoln: A Biography. He's also the author of The Eloquent President: A Portrait of Lincoln Through His Words (2005) and Lincoln's Greatest Speech: The Second Inaugural (2002). He likes to tell the story that his interest in Lincoln dates back to his visit to the 1993 Huntington Library exhibition "The Last Best Hope of Earth: Abraham Lincoln and the Promise of America." He conducts much of his research at The Huntington.

White will give another talk on Saturday, this time as the keynote speaker at a luncheon at the Willard Hotel, where Lincoln stayed before moving to the White House. The event is sponsored by the Lincoln Group of the District of Columbia and follows a morning program at the Capitol Visitor Center that features actor Sam Waterston reading the inaugural address, including the famous last line: "The mystic chords of memory, stretching from every battlefield and patriot grave to every living heart and hearthstone all over this broad land, will yet swell the chorus of the Union, when again touched, as surely they will be, by the better angels of our nature."

"I'll be talking about this marvelous rhetoric," says White. "In times of crisis we so often see politicians appealing to the fears of people, but Lincoln appealed to their hopes."

You can listen to White discussing his book A. Lincoln: A Biography on iTunes. You can link to his new essay on the website of NPR; it will be broadcast on All Things Considered at a later date.