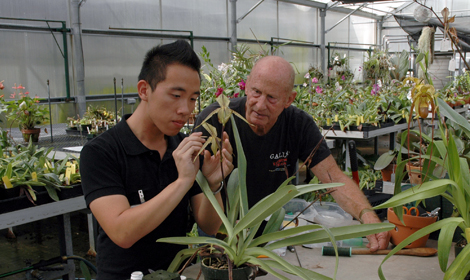 Brandon Tam and Lance Birk pollinate a Paphiopedilum rothschilianum in the Huntington greenhouse.

Brandon Tam and Lance Birk know what it's like to drive the 101 Freeway with a truck full of orchids. Last summer, they helped move more than 6,000 orchids from the Santa Barbara home of the late S. Robert Weltz to the greenhouses of The Huntington. Tam is a former intern at The Huntington and is now on staff caring for part of the orchid collection. He works in tandem with Birk, a volunteer who knew Weltz personally and suggested The Huntington as a possible home for the collection. You can read more about their role tending to the new collection in the current issue of Huntington Frontiers.

This month, they drove some of the finest specimens back to Santa Barbara for a homecoming of sorts. For the first time in the history of the Santa Barbara International Orchid Show, The Huntington entered the exhibition. Weltz himself had been a mainstay at the Orchid Show throughout his productive 40 years as a grower and hybridizer. He was also past director of the show and served on the board of the American Orchid Society.

The show's brochure included a nice write-up to mark The Huntington's debut, adding a bit of history on Henry Huntington's first superintendent of the gardens, William Hertrich, who is acknowledged as the first to grow cymbidiums outdoors in Southern California. The brochure and exhibition guide highlighted the 66th anniversary of the show by using a graphic of the old highway 66 sign, a fitting on-the-road theme for Tam and Birk's drive back to Santa Barbara.

"For our first year we did better than we expected," says Tam, honored to have received five first place ribbons, including the Wilcox Trophy for Best Paphiopedilum in Show (Paphiopedilum hainanense 'Hang Ten').

"We want the orchid community to know that we are serious about doing our part in the orchid world," says Tam, "whether that may be in research or in conservation. The awards show the significance and importance of the donation we received from Bob Weltz."

At the end of the show, Tam and Birk packed up the orchids for another drive back to The Huntington and are now used to the idea of making the annual pilgrimage every March. You can learn more about the show and find out information on future exhibitions online.

You can also download the talk "Getting to Know Orchids" from iTunes U, where Jim Folsom, the Telleen/Jorgensen Director of the Botanical Gardens, talks about the science of orchids.