Pioneers at the Wheel 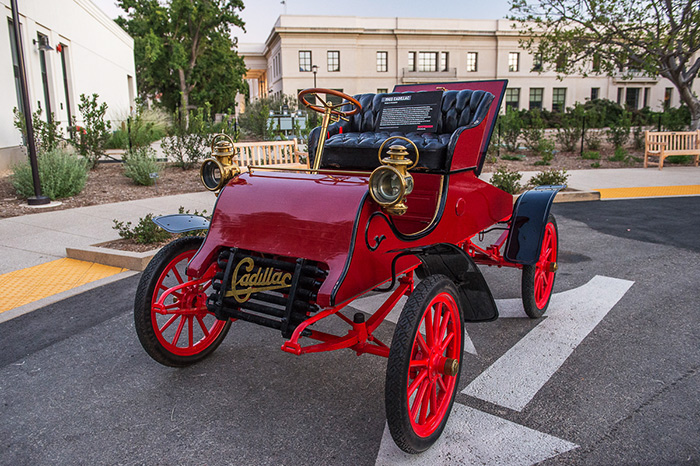 A 1903 Cadillac from the Petersen Automotive Museum, on display at The Huntington’s Aug. 8 event to celebrate the publication of Motoring West, Volume 1, Automobile Pioneers, 1900–1909, edited by Peter J. Blodgett. Photo by Martha Benedict.

Heroic tales of 19th-century frontiersmen pushing westward across the American continent have a tenacious hold on the popular imagination. Think, for instance, of Lewis and Clark exploring the waterways of the newly acquired Louisiana Purchase or the tragedy of the Donner Party traveling by wagon train to reach California. Yet few discuss the trials and tribulations of another set of pioneers—those who hit the road at the turn of the 20th century to explore the West by automobile.

And while these more recent explorers may not have faced the same dangers as their earlier counterparts, their adventures had their own allure. Take, for example, the wonder and excitement in “Frontiering in an Automobile,” a 1903 essay included in Blodgett’s book recounting a journey from Colorado Springs to Sante Fe and back. The essay, by Colorado attorney Philip Delany and first published in Outing magazine, concludes with these lines:

We crowded what used to take months to do in nine days—nine hundred miles up mountain and down valley. The trails of Kit Carson and Boone and Crockett, and the rest of the early frontiersmen, stretch out before the adventurous automobilist. And when he is tired of the old, there are new paths to be made. He has no beaten track to follow, no schedule to meet, no other train to consider; but he can go with the speed of an express straight into the heart of an unknown land . . . 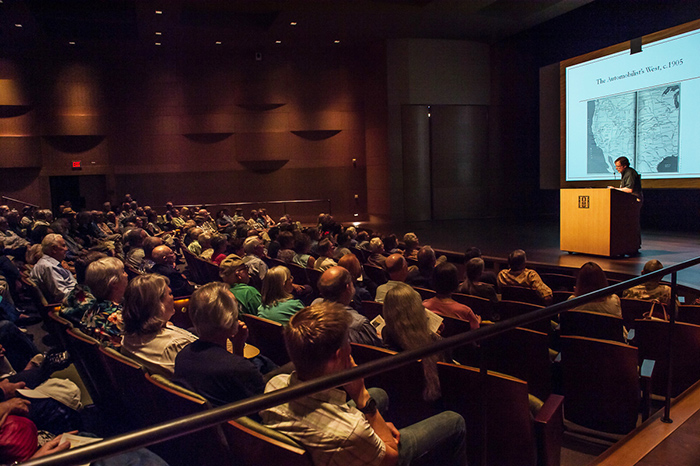 The awe of early motoring was balanced by the reality of traversing a rugged landscape in a vehicle one step removed from a horse and buggy. Blodgett spoke of the challenges early automobile drivers faced during a recent public lecture at The Huntington’s Rothenberg Hall. (You can listen to the lecture at iTunes U or download it directly here.) Adding to the atmosphere of the event were several vintage cars on view outdoors.

Blodgett showed a 1905 map of the U.S. that delineated mountains and rivers, but no highways. Most roads were unpaved and, in a downpour, could quickly turn into a morass popularly called “gumbo.” Drivers at the time were at the mercy of the elements, as could be seen in an ad for a Rambler touring car enticing the driver to heed “The Call of the Open Road.” Early automobiles—such as the 1903 Cadillac from the Petersen Automotive Museum on view at the event—had no roof, no windows, and no windshield. Breakdowns were frequent and repair shops nonexistent. Manufacturers typically recommended a long list of equipment to take along to make repairs, even suggesting the purchase of a second car of the same make and model to use for parts.

Despite these potential weaknesses, early automobiles offered an irresistible advantage: speed. As Delany recounts, “. . . away we went at a rate of thirty miles an hour, transfixing with wonder a few Mexicans who were camping near by.” And unlike the railroad, the "machine" could take you where you wanted to go. 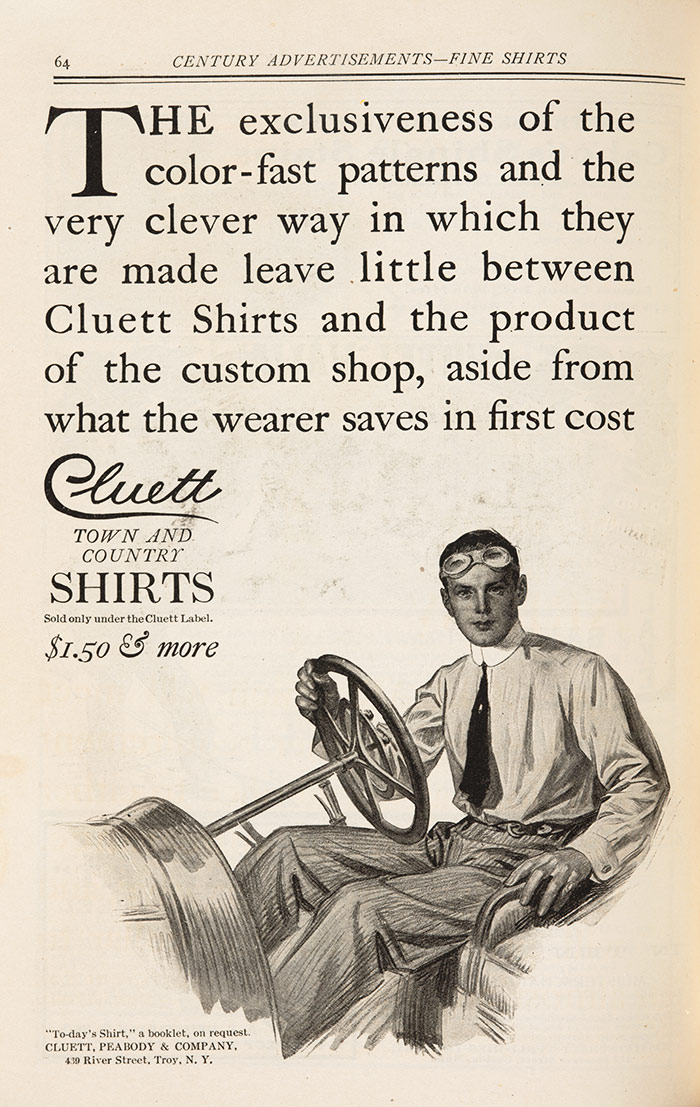 With awareness of and interest in automobiles percolating through the newspapers and magazines of the early 20th century, manufacturers of other products began relying upon the motor car to promote sales of their goods, as seen in this 1908 advertisement for Cluett Town and Country Shirts. The Huntington Library, Art Collections, and Botanical Gardens.

The first autos were luxury items reserved for the wealthy. A 1909 Rambler, for example, cost $2,250 at a time when most people’s annual salary hovered around $1,000 to $1,500. Marketers caught on to the appeal of automobiles as attractive emblems of prosperity and used them to sell other products. For instance, an advertisement for Town and Country dress shirts by Cluett (later known for its “Arrow” line of men’s wear) showed a handsome, goggled man at the wheel of his sleek motorcar.

This volume of Motoring West is the first in Blodgett’s four-book series. At its roots is a collection of accounts of 20th-century automobile travelers in the American West amassed by Carey S. Bliss, The Huntington’s former curator of rare books. Blodgett discovered the materials as a student at Yale University and has been eager ever since to bring the stories to light. He has supplemented that collection with other materials from The Huntington’s holdings, including periodicals, pamphlets, and private diaries.

Blodgett wasn’t the only one with stories to tell about road trips and classic cars. Stirred by Blodgett’s words and strolling among the Model A’s, Packards, and Caddies on display, many participants shared accounts of their experiences. It seems the romance of motoring lives on. 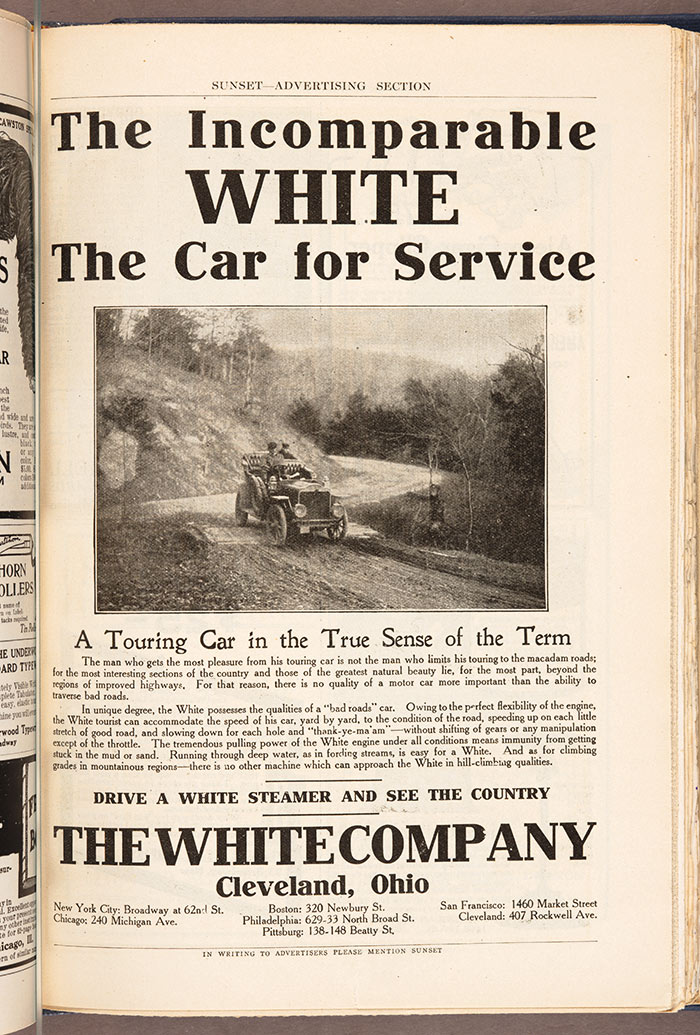 This 1908 advertisement in Sunset assured the reader that the White steamer could surmount any obstacle on the road, ranging far beyond the realm of “improved highways.” A “true” touring car, the manufacturer asserted, could take the traveler to precincts of the “greatest natural beauty,” even if it had to cross the most intractable terrain. The Huntington Library, Art Collections, and Botanical Gardens.

You can read Peter Blodgett’s essay “How Americans Fell in Love with Taking Road Trips,” written for What It Means to Be American, a national conversation hosted by the Smithsonian and Zócalo Public Square, on the website of Time.

You can also read a story about Blodgett and his book on the website of the Los Angeles Times.

Blodgett's book, Motoring West, may be purchased online from the Huntington Store.

Linda Chiavaroli is a volunteer in the office of communications and marketing at The Huntington. She is a Los Angeles-based communications consultant.