"Several Lives in One" 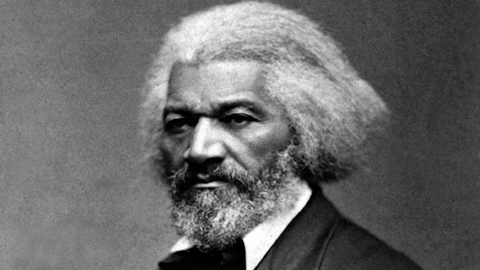 If you haven't yet decided to attend David Blight's lecture tonight in Friends' Hall, you might listen to the podcast of the talk he gave at The Huntington a couple years ago. Blight is an engaging and eloquent speaker on all topics related to the Civil War. His focus tonight will be Frederick Douglass; in April 2009, he delivered a talk called "Lincoln and the American South" as part of the conference titled "A Lincoln for the Twenty-First Century."

On that occasion, as the country celebrated the bicentennial of the birth of our 16th president, more than one speaker took the podium and noted how remarkable it was that they still had so much to say despite the volume of published works about Lincoln. Blight, who is working on a new, full biography of Douglass, might say something similar tonight about the famed ex-slave and orator. After all, Douglass wrote three well-regarded autobiographies: Narrative of the Life of Frederick Douglass, an American Slave, Written by Himself (1845), My Bondage and My Freedom (1855), and The Life and Times of Frederick Douglass (1881).

What more can be said? Blight's lecture title alludes to the challenges he faces as a historian and biographer: "'Several Lives in One': The Problem of Autobiography in Writing the Biography of Frederick Douglass." The first phrase evokes Douglass' own musings on his complicated life: "I have lived several lives in one: first, the life of slavery; secondly, the life of a fugitive from slavery; thirdly, the life of comparative freedom; fourthly, the life of conflict and battle; and fifthly, the life of victory, if not complete, at least assured."

In his lecture tonight in Friends' Hall (at 7:30 p.m.), Blight will describe his own challenges as well as the ones faced by Douglass. The lecture is free and open to the public.

Blight is the Rogers Distinguished Fellow at The Huntington for 2010–11. He is Class of 1954 Professor of American History at Yale University and director of the Gilder Lehrman Center for the Study of Slavery, Resistance, and Abolition at Yale. In addition to his Douglass biography, he is also working on a book that looks back 50 years to the centennial of the Civil War, including a discussion of novelist James Baldwin. The Harvard University Press Blog includes a video interview of Blight about that work in progress. The Press also published Blight's award-winning book Race and Reunion: The Civil War in American Memory (2001).