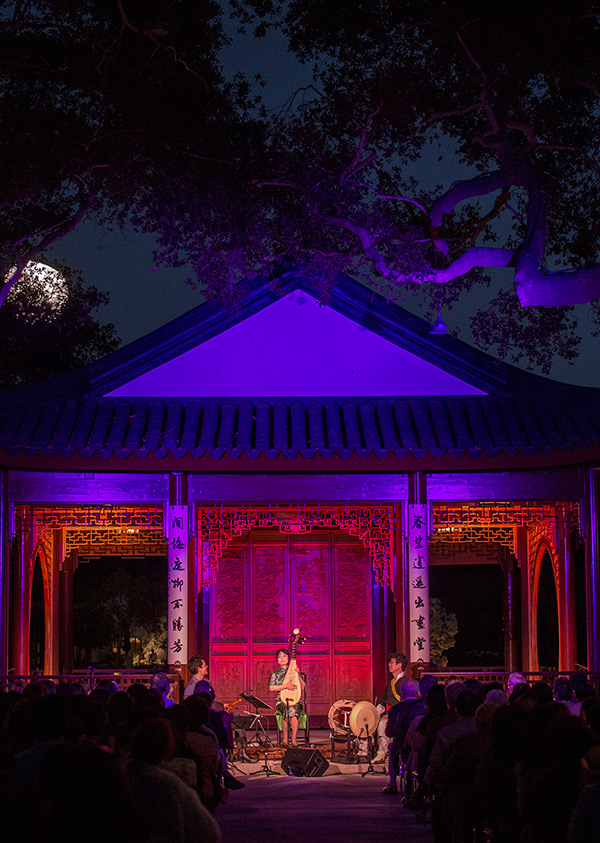 Few things are more relaxing than live musical performances at The Huntington during the summer. Don’t forget that every Wednesday from 1 to 3 p.m., you can enjoy traditional music in Liu Fang Yuan, the Garden of Flowing Fragrance. In fact, an early summer performance in the garden’s Clear and Transcendent pavilion is still reverberating. You can now watch a video of Wu Man, the renowned virtuoso of the pipa (or Chinese lute), whose performance of a specially commissioned work on June 18 capped off her residency as the Chinese Garden’s first visiting artist.

The concert kicked off the Chinese Garden’s Clear and Transcendent pavilion as a new venue for cultural programs. Native oaks arched over the audience seated in the adjacent courtyard. In the evening’s introduction, Chinese Garden Curator June Li said the pavilion’s name alludes to “music reaching every crevice of the garden and across the water.” The garden is modeled after classical Chinese gardens of Suzhou. During the 16th and 17th centuries, merchants of the busy trading center prospered and built enchanting private retreats. Their gardens were a world of refinement and harmony as pavilions became stages for music and dance.

In front of the pavilion’s blond gingko wood screen, with intricate carvings of traditional musical instruments on one side and scenes from the Chinese play The Peony Pavilion on the other, Wu strummed the pipa and was joined by Kojiro Umezaki, who played the shakuhachi, a Japanese bamboo flute, and Dong-Won Kim, who beat the jang-go, an hourglass-shaped Korean drum. Since there’s no extant music written for all three instruments combined, original arrangements comprised the heart of the program. Wu composed Three Sharing because she felt inspired by the garden’s Three Friends pavilion, which represents the pine, bamboo, and plum during early spring in China. 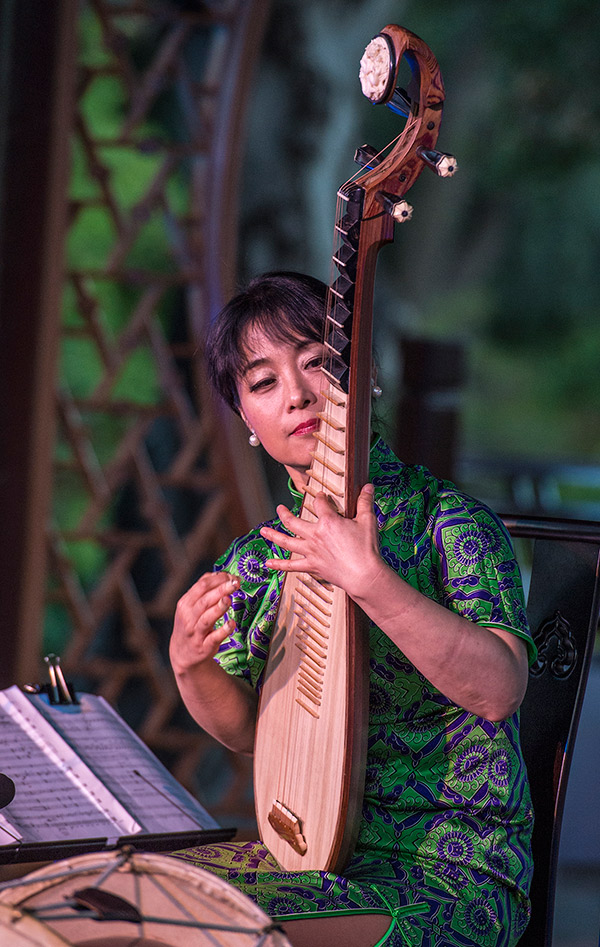 Wu has traveled extensively during her musical career, appearing with major symphony orchestras, playing in the world’s great concert halls, and performing with Yo-Yo Ma’s Silk Road Project. In the case of the music, as Wu pointed out, the cultures of China, Japan, and Korea meld to become a distinct sound that reminded Li of jazz improvisation. “Wu Man not only cares about traditional Chinese music,” she observed, “but also how that music connects with contemporary life.”

The concert culminated Wu’s five-month residency, which inaugurated The Huntington’s Cheng Family Visiting Artist Program and utilized her musical talents as a teacher and communicator. As part of the residency and The Huntington’s partnership with Eliot Middle School in Altadena, Wu visited a 7th grade band class at the school. Audrey Durden, The Huntington’s school programs and school partnerships manager, said students were initially skeptical about the pipa, an instrument they had never seen before. “But Wu Man just charmed them,” she said. By the end, a couple of the students wanted to skip lunch and join in with their own instruments.

As for future events in the Chinese Garden, Li said next year’s musician-in-residence could be someone who plays the music of Chinese composers in Western orchestration. She also envisioned presenting Kun opera, an ancient form from the Suzhou region. And perhaps one day those Peony Pavilion scenes that are carved on the panel in the Clear and Transcendent pavilion will spring to life in the Garden of Flowing Fragrance.

Click here to watch video of the June 18th performance of Wu Man, Kojiro Umezaki, and Dong-Won Kim. Also on YouTube is video of a Huntington concert from May 20, 2014, featuring Wu Man and Gamin, performing on the Korean saengwhang and piri. 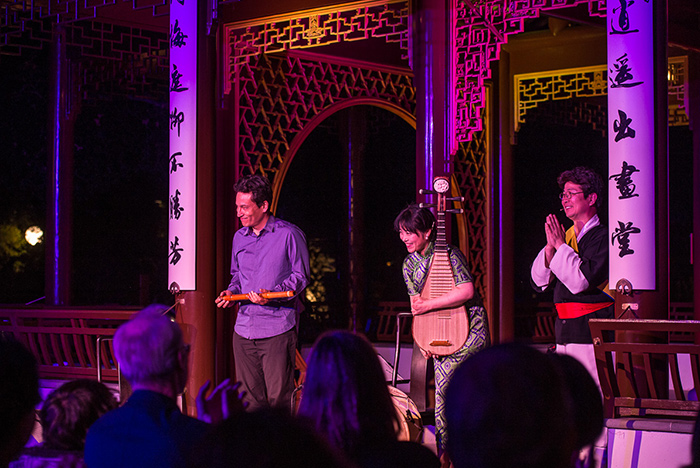 The three performers take a bow at the conclusion of the concert.