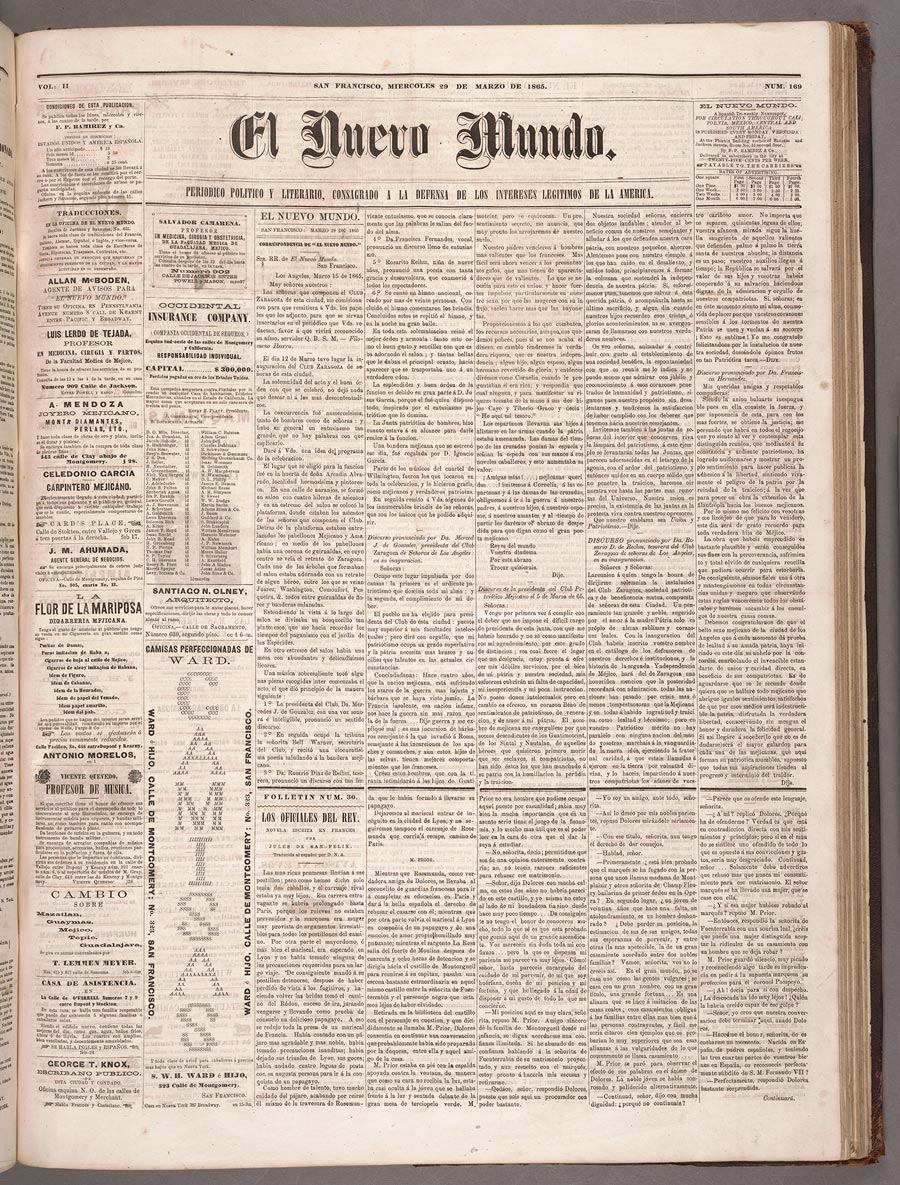 Detail of the front page of San Francisco’s El Nuevo Mundo newspaper, March 29, 1865. At the time, the growing mass production and circulation of Spanish-language newspapers radically altered everyday practices of reading, community organizing, and sharing ideas for the Latinx community in California. The Huntington Library, Art Museum, and Botanical Gardens.

In 1865, the El Nuevo Mundo newspaper of San Francisco invited its readers to join in toasting Mexico’s heroes and roasting its imperialist enemies by printing brindis, or toasts, performed by women of the Zaragoza Club of Los Angeles and the Patriotic Club of Mexico of Virginia City, Nevada. Members of these clubs were mostly lower- and middle-class Mexican and Mexican American women, although Chilean, Spanish, and Native American women also participated. The Huntington’s El Nuevo Mundo collection contains details of lively fundraising parties, organized by the clubs, where the brindis were given. The collected money went toward the Mexican war effort to fight the French invasion of Mexico, begun by Napoleon III’s troops in 1862, and the installation of Austrian-born Archduke Maximilian I as emperor of the Mexican Empire in 1864.

The brindis spoken at club events and printed in the newspaper were more than social gestures intended to impassion and inebriate potential donors. Brindis became a means for women of the Mexican patriotic clubs to assert their capacity for leadership, humor, and poetic wit, as well as express their social and political solidarity with one another—all within the public forum of the newspaper.

The brindis are easy to spot. Below, they are printed in the far-left column, with a short horizontal line separating them and a woman’s name attributed to each one. 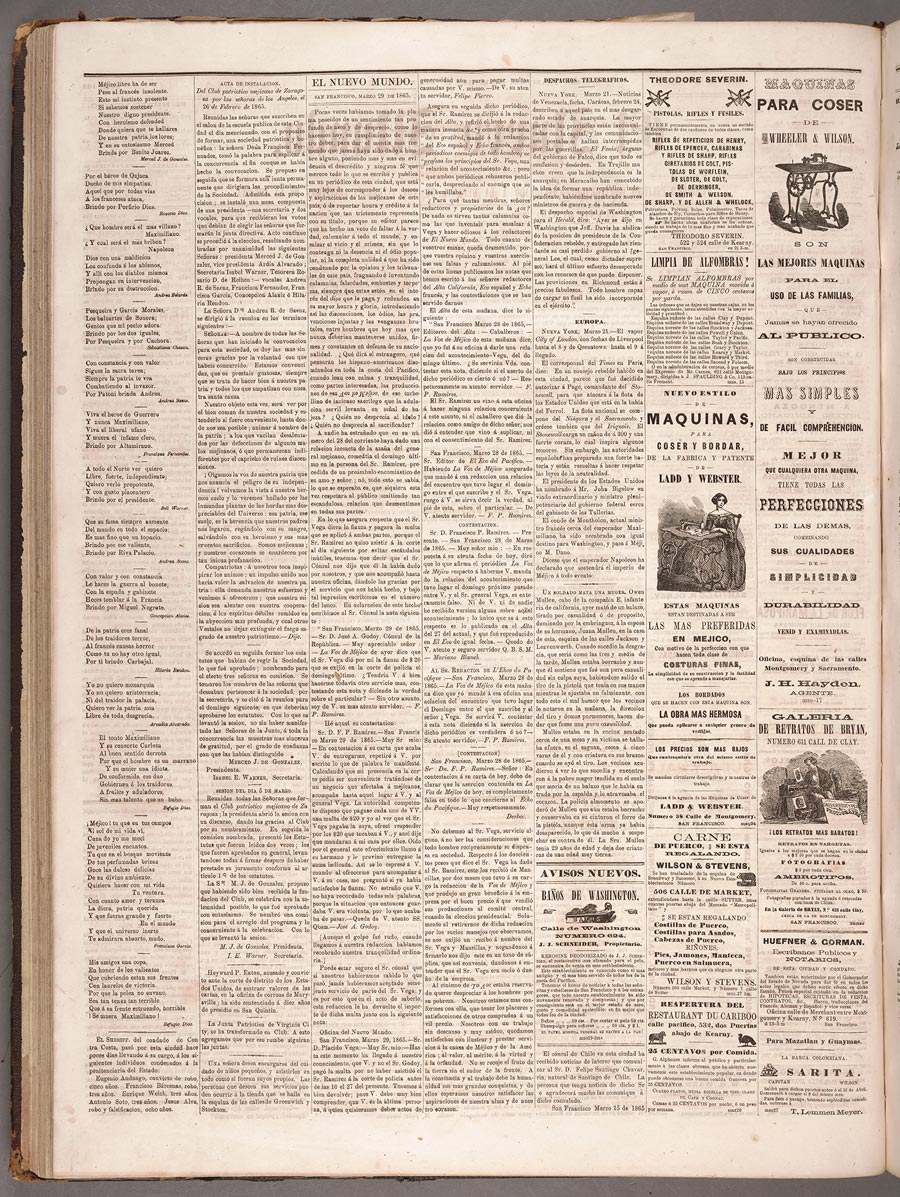 Second page of San Francisco’s El Nuevo Mundo newspaper, March 29, 1865. The brindis, or toasts, printed in the far-left column were spoken by women of the Zaragoza Club of Los Angeles. The Huntington Library, Art Museum, and Botanical Gardens.

With their cartoonish portraits of villainy and strong condemnations of imperialism, the roasts among these toasts are my favorites. I like to imagine the raucous fervor that Andrea Belarde’s brindis must have inspired in her fellow revelers:

¿Que hombre será el mas villano?
Maximiliano.
¿Y cual será el mas bribon?
Napoleon
Dios con una maldicion
Los confunda á los abismos,
Y allí con los diablos mismos
Propongan en intervencion,
Brindo por su destruccion.
What man will be the most villainous?
Maximiliano.
And which will be the most rogue?
Napoleon
God with a curse
He confounds them to hell,
And there with the devils themselves
They propose invasion,
I toast to their destruction.

Belarde’s brindis condemns Mexico’s enemies to hell and toasts to their obliteration. Belarde was a member of the Zaragoza Club of Los Angeles, and her verses were published alongside those of fellow club members on March 29, 1865. Two months later, brindis performed by women of the Patriotic Club of Mexico of Virginia City were printed alongside reporting of Cinco de Mayo festivities held in their small mining town in Nevada. Commemorating the underdog victory of Gen. Ignacio Zaragoza’s forces three years earlier at the Battle of Puebla, Cinco de Mayo was still a fresh and energizing symbol of hope in 1865, and the Mexican patriotic clubs of the southwestern United States were eager to leverage that enthusiasm to raise money for the war effort. 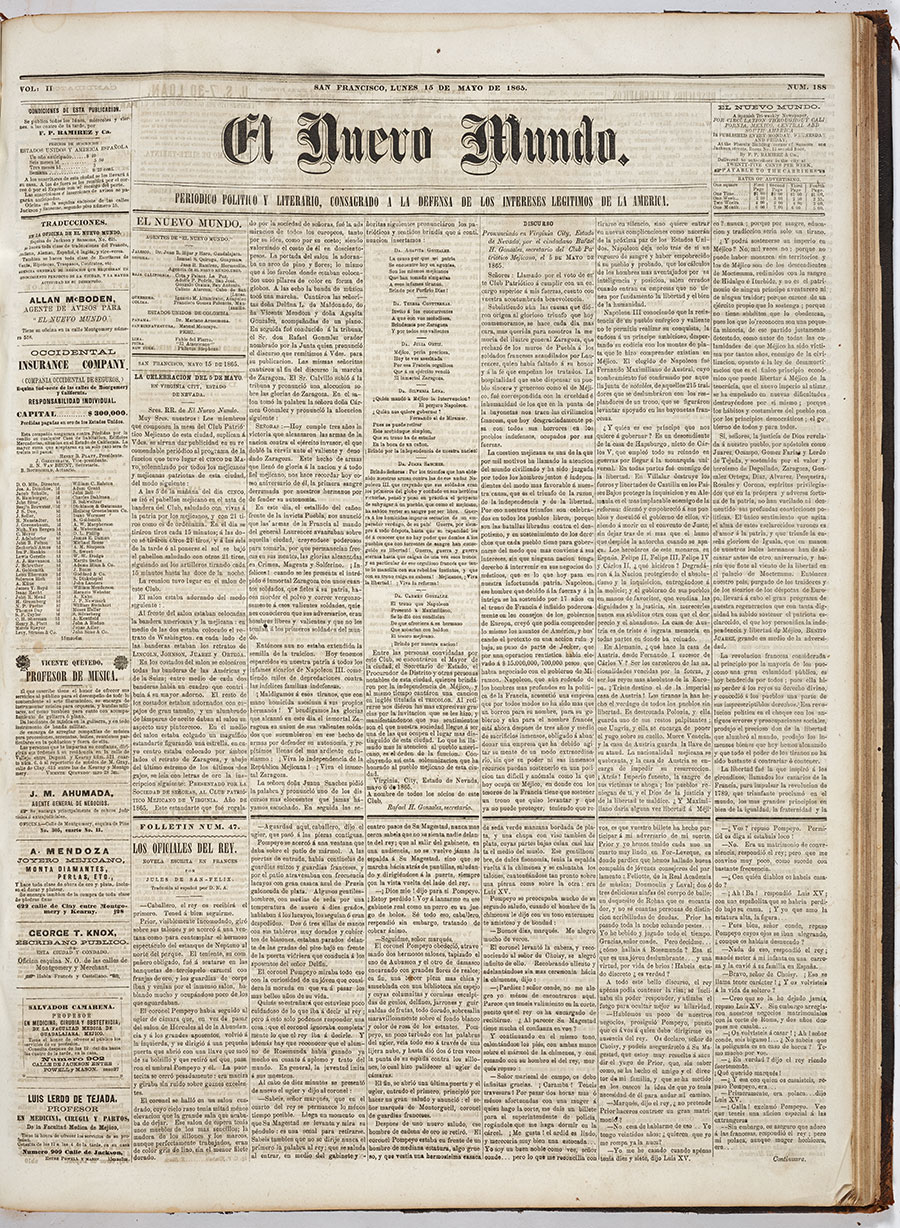 Front page of San Francisco’s El Nuevo Mundo newspaper, May 15, 1865. The brindis poems by women of the Patriotic Club of Mexico of Virginia City, Nevada, were delivered at a Cinco de Mayo celebration. The Huntington Library, Art Museum, and Botanical Gardens.

One brindis in the May 1865 series might sound familiar, and—once again—it is firmly in the roast category:

This brindis by Silveria Luna has the same structure and tone as that of Andrea Belarde’s, but Luna indulges in the fantasy of Maximilian’s throne exploding in the mouth of a cannon. Beginning with call and response to name the wrongdoers, the brindis moves to violent and outrageous fantasies of the enemy’s destruction and concludes with a line encouraging those present to raise a glass and toast to Mexico’s triumph. By translating these two brindis, I want to highlight how Luna’s riffing joins her and Belarde subtly, but publicly, as compañeras, or comrades, fighting the same enemy for the same cause across the span of a few hundred miles. Despite the distance between them, Luna sees Belarde in a special way; having read and emulated Belarde, Luna shows not only that they share political common ground, but also that she respects Belarde’s poetic wit.

Let’s take a look below at one last set of brindis from The Huntington’s El Nuevo Mundo collection. These toasts also made front-page news and are positioned just to the right of center. 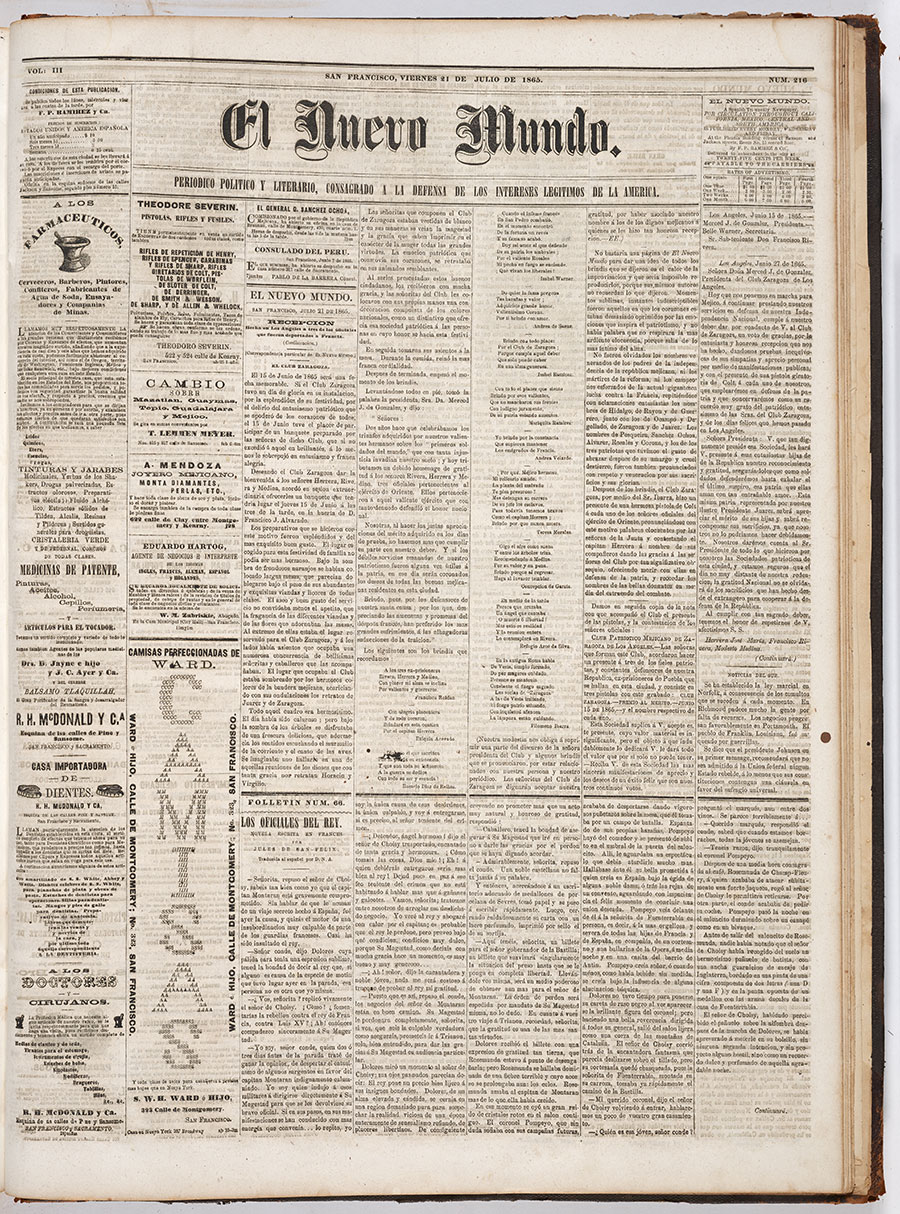 Printed on July 21, 1865, these brindis poems by Zaragoza Club members were delivered at an elaborate reception organized to honor three Mexican army officers who had been held for a year as prisoners of war in France and who were passing through Los Angeles on their way back to Mexico: José María Herrera, Francisco Rivera, and Modesto Medina. The toasts were imbued with admiration and praise for the guests of honor. Refugio Arce de Silva’s brindis in honor of Rivera is a perfect example:

En medio de la tarde
Parece que cruzaba
Un ángel que cantaba:
¡O muerte ó libertad!
Mas esto es realidad;
Y la reunion entera
Lo contemplará en Rivera.
In the middle of the afternoon
There seemed to pass by
An angel who sang:
Either death or freedom!
But it was reality;
And all gathered
Had gazed upon Rivera.

Silva’s effusive lines reflect the intense excitement and patriotism that the sensational story of these prisoners of war provoked in Los Angeles. As opposed to Belarde and Luna, who vented their ire for imperialist enemies, Silva’s verses show a contrasting sentiment that was also prevalent in the brindis series published by women of the Mexican patriotic clubs: heartfelt appreciation for the allies and heroes these women revered.

On social media platforms, it is common to see “boomerang” videos of clinking glasses, selfies of partygoers, and photos of sumptuous dishes to commemorate special events. The brindis poems of 19th-century Latinas like Belarde, Luna, and Silva also give glimpses of these ephemeral and intimate moments shared among friends, family, and community members. Beyond providing insight into the anti-imperialist political values of the women of these Mexican patriotic clubs, the brindis showcase their creative capacities, solidarity, and humor. 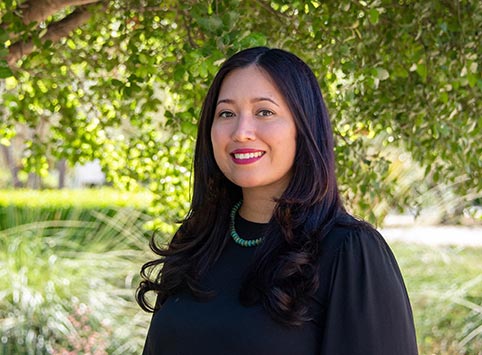 Vanessa Ovalle Perez is an assistant professor of English at California State University, San Bernardino, and a 2022–23 Barbara Thom Postdoctoral Fellow at The Huntington. Photo by Deborah Miller.

If you would like to learn more about these brindis, you can read my article “Toasting México in the American West: Brindis Poems and Political Loyalties of Women’s Mexican Patriotic Clubs” in Letras Femeninas.

Vanessa Ovalle Perez is an assistant professor of English at California State University, San Bernardino, and a 2022–23 Barbara Thom Postdoctoral Fellow at The Huntington.