On the Trail of a Deadly Pest 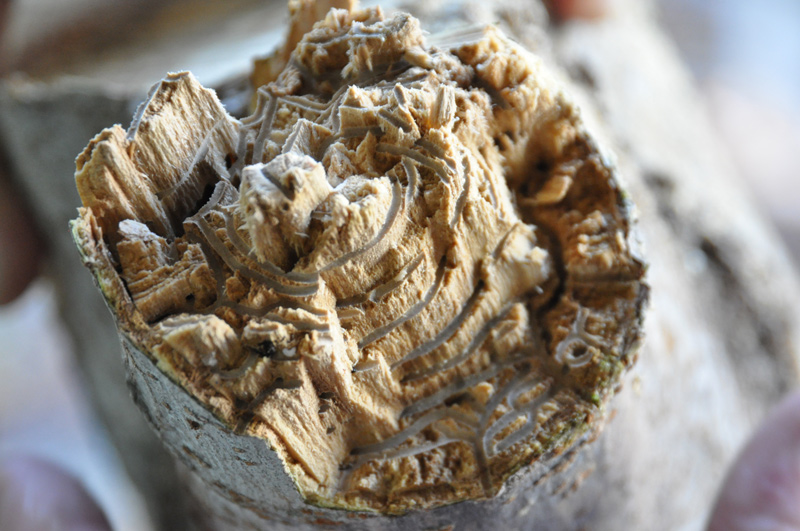 A branch from a box elder tree shows the extensive galleries (the gray, snaking pathways) created by the polyphagous shot-hole borer. This tree had to be removed by garden staff. Photo by Maxx Echt.

The Huntington’s Botanical Gardens have long been a spectacular locale for strolling among diverse arrays of trees and plants. Less known to everyday visitors is the fact that the gardens also have long served as a lab of sorts for botanists and natural scientists who use the collections in their field research about flora and fauna.

One such research project is covered in a story that appeared this week in the blog of the Huffington Post—“Huntington Botanical Gardens Warn of Super-Pest: Is Anybody Listening?”In it, writer Stephanie Woodard tracked the recent efforts of a group of scientists, arborists, and horticulturists who are researching the impact of a small beetle that is threatening as many as 250 species throughout Southern California, including many trees at The Huntington. The insect seems to breed in a few principal trees, known in the vernacular of scientists as “reproductive hosts”—including oak (native and English), box elder, avocado, and castor bean.

Because many of these trees are represented in The Huntington’s collections, the gardens are proving to be an important research site. 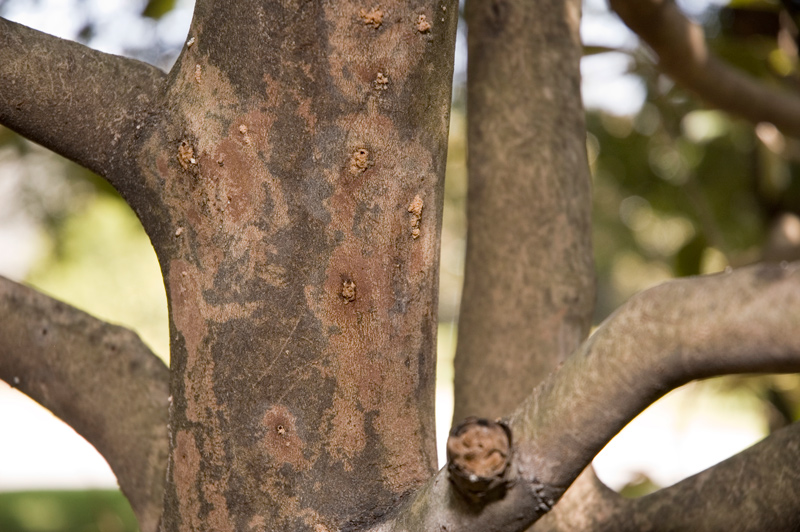 The trunk of a Camellia semiserrataspecimen bears tell-tale entry and exit marks surrounded by mounds of frass (the digested waste excreted by the insects). Photo by Lisa Blackburn.

Experts are still trying to determine the source of the beetle, with the earliest findings of it in the Whittier Narrows. The Huntington, like every backyard and garden throughout Southern California, just happens to be in the path of this tiny creature—known as the polyphagous shot-hole borer (PSHB)—that also deposits a lethal fungus after it bores all those holes.

“The Huntington has had the unfortunate honor to be located in an area where the PSHB has become very common,” says Richard Stouthamer, an entomologist from the University of California, Riverside, who has teamed with Akif Eskalen, a plant pathologist at UCR, to map the affected zone, which covers much of Los Angeles County and parts of Orange County. 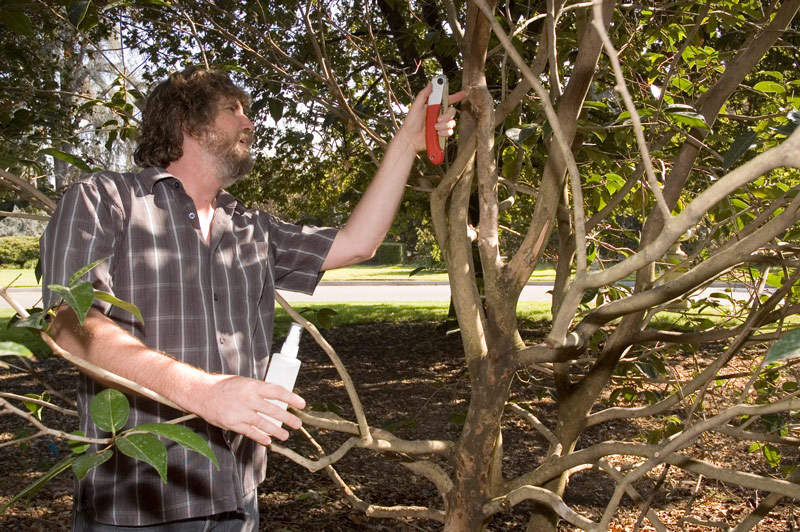 Tim Thibault, The Huntington’s curator of woody collections, looks for signs of infestation in the Camellia semiserrataspecimen. In his right hand he is carrying isopropyl alcohol to disinfect his garden tools, thereby avoiding contamination of other plants with the deadly fungus, or fusarium, that the beetles leave behind. Photo by Lisa Blackburn.

Earlier this year the pair approached Tim Thibault, The Huntington’s curator of woody collections, with a list of trees common to suburban cities throughout Southern California, suspecting they could find many infected specimens on the grounds of The Huntington in order to streamline their research. Thibault knew The Huntington’s database and mapping software was accurate, so a quick review showed that virtually all of the trees on the list had corresponding specimens in the gardens, allowing the researchers to make conclusions about the beetle’s preferred feeding and breeding ground.

“I also made sure that they looked at every woody plant family that we have,” adds Thibault, “so I helped them form the taxonomic breadth of their survey.” Thibault is collaborating with Eskalen and Stouthamer to publish a list of the host range of the beetle.

The Huntington has also been a great testing ground for practicing methods of controlling or eradicating the beetle. One approach measured the effectiveness of using large branches of six different native tree species as a kind of trap—by placing them in two arcs around an affected tree, the team could track the numbers of beetles that ended up on the different branches (versus a fly paper control). In other instances, chipping and drying the wood from infected trees might serve to slow the spread. 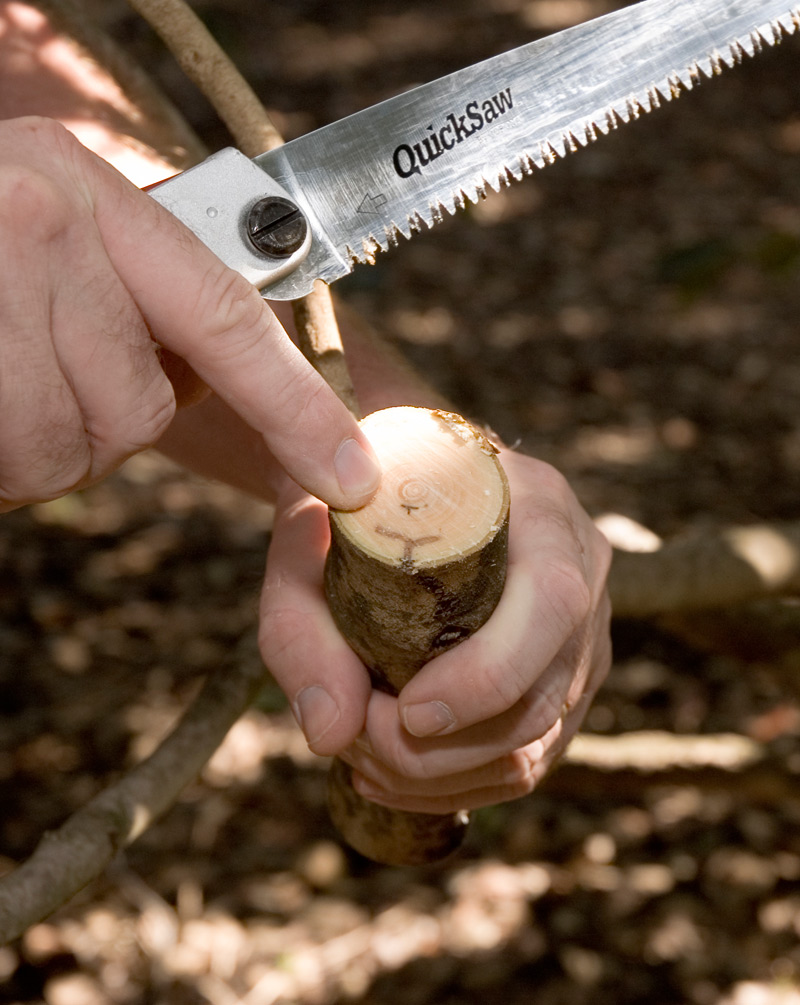 A cut branch shows two Y-shaped galleries created by the female beetle boring into the wood of the camellia branch. Photo by Lisa Blackburn.

Eskalen and Stouthamer say their job has been made easier by The Huntington’s diverse and meticulously documented collection. Thibault, in turn, shares the credit with the diverse team of staff members in the botanical division who are constantly in the gardens, often at the request of other researchers. “It’s the number and variety of people here,” he says, “all working to document the collection, that make it tick.”

You can track the progress of these efforts on the website of UCR’s Center for Invasive Species Research. There you can find other resources on how to learn more about the pest. We’ll share more information on Verso in future posts.