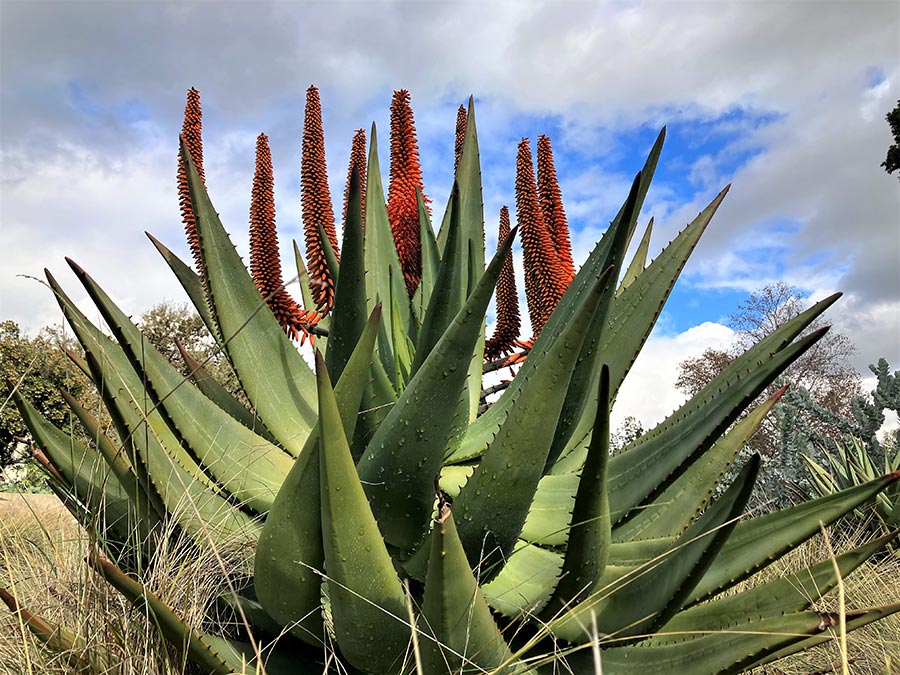 The vibrant inflorescences of this Aloe ferox seem to defy the winter sky. Other aloes that bloom at this time of year include A. arborescens, A. dichotoma, A. x principis, and A. tongaensis. Photo by Sandy Masuo.

An array of winter-blooming plants from around the world are taking the stage at The Huntington, putting on floral performances that add vibrancy to the gardens at a time of the year that some might think is surprising. But these flowers, which provide a rich feast for our eyes in the off-season, are often an important food source for wildlife. 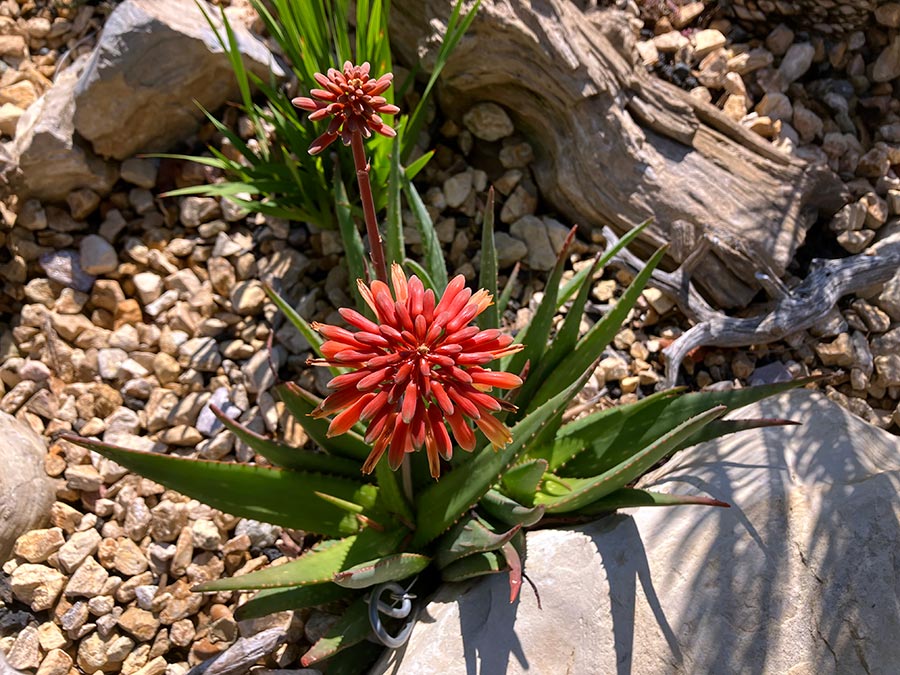 Throughout the gardens, winter-blooming aloes are producing torchlike inflorescences of glowing orange and yellow blooms. In their native range, primarily the Cape region of Africa, they would be doing so starting in May, which is when winter arrives in the Southern Hemisphere. When grown in the Americas, aloes are highly attractive to hummingbirds, orioles, and other nectar feeders. In their natural habitat, aloes are an important source of nectar for sunbirds and weaver birds, which occupy similar ecological niches. The tubular, downward-angled flowers, with their protruding stamens, dust pollen on the heads of the birds who perch on their flower stalks and feed. 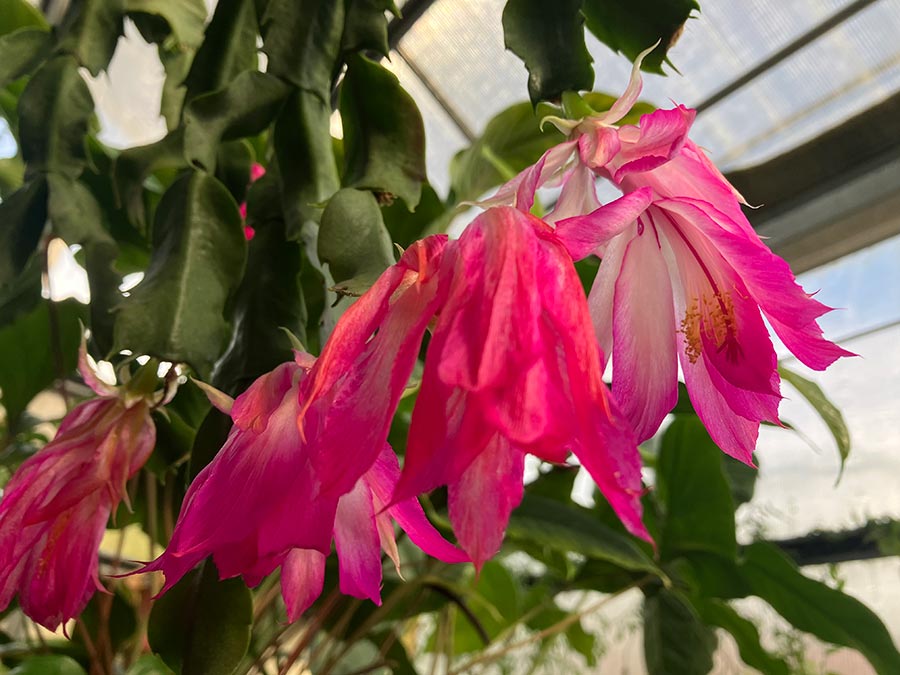 Schlumbergera orssichiana is endemic to a small region of southeastern Brazil. Due to its tiny range and the pressures of habitat loss, it is classified as endangered by the International Union for Conservation of Nature. Botanical Gardens staff at The Huntington hope to propagate this species. Photo by Sandy Masuo.

Plants in the genus Schlumbergera have evolved to accommodate pollination by hummingbirds. These cactuses originate in the coastal mountains of southeast Brazil, where they grow as epiphytes (on top of other plants, though they are not parasitic) or lithophytes (in rock crevices). Their bright blooms, which range from white to pink and red, with many shades in between, have long been cultivated by people for their beauty. The pendent flowers drape downward with pollen-laden stamens positioned to brush the heads of hummingbirds as they hover and feed. When grown in the Northern Hemisphere, these plants bloom from roughly November through January, which has led to such common names as Thanksgiving Cactus and Christmas Cactus. However, in their native Brazilian range, winter arrives as our summer unfolds, and one common name for these plants there is Flor de Maio, or May Flower. 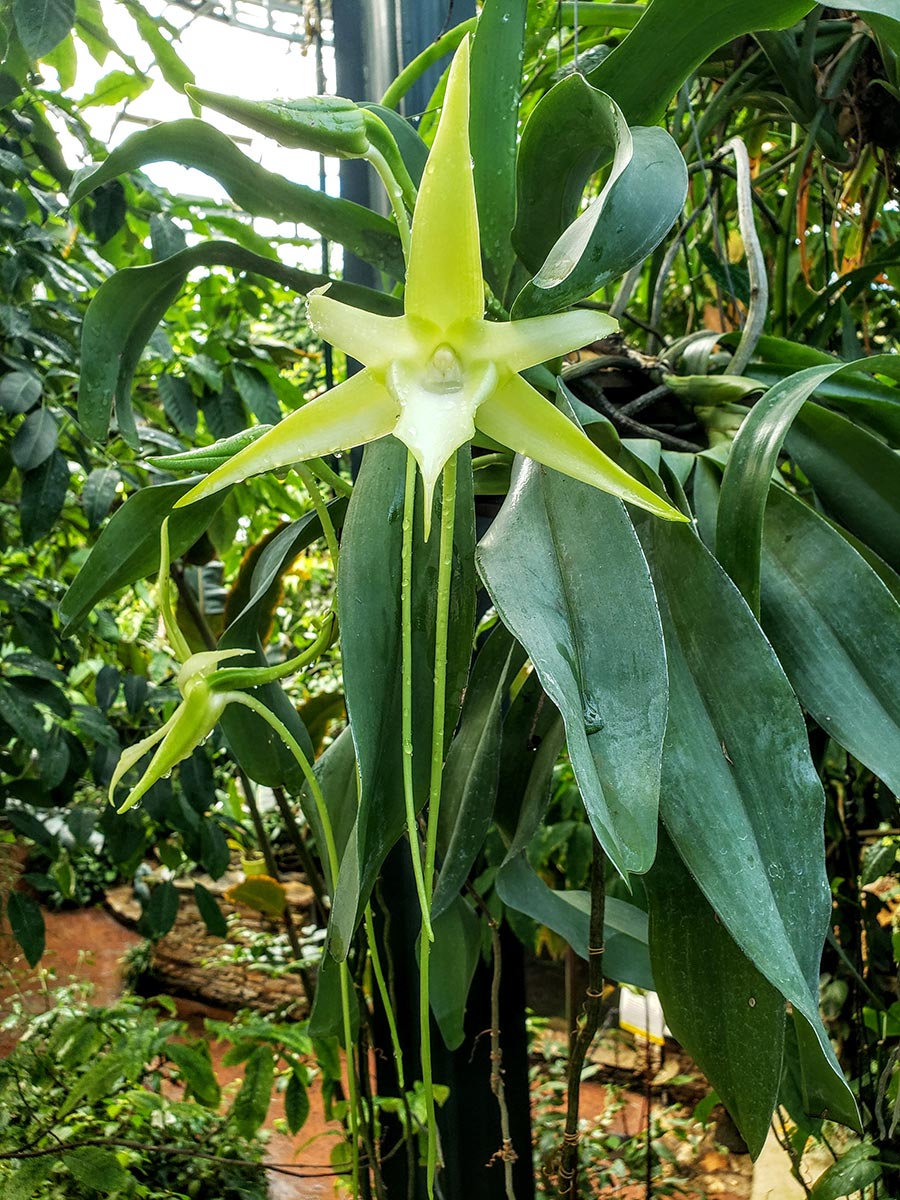 Light and temperature play a part in triggering Angraecum sesquipedale to bloom. This unusual orchid is on display in the rotunda of The Rose Hills Foundation Conservatory for Botanical Science. Photo by Brandon Tam.

At this time of year, visitors to The Rose Hills Foundation Conservatory for Botanical Science may glimpse another winter bloomer from the Southern Hemisphere—an orchid plant bearing luminous, white, star-shaped flowers with exceptional “tails” that can reach 12 inches in length. Angraecum sesquipedale is found only on the subtropical island of Madagascar, which, like California, experiences essentially two seasons. Unlike California, the island receives most of its precipitation during its hot summer months, November through April. This orchid blooms during Madagascar’s cool, dry winter (June through September). French botanist Louis Marie Aubert du Petit Thouars introduced Angraecum sesquipedale to the Northern Hemisphere in 1802. In Europe, the stellar flowers appearing in December led to its association with yuletide and such common names as Christmas Orchid and Star of Bethlehem Orchid. Later, in 1862, when Charles Darwin saw a specimen of this flower with its remarkable nectar spur, he famously theorized that the plant’s pollinator must be an insect with a tongue long enough to access the nectar. Alfred Russel Wallace reached the same conclusion five years later when he encountered the plant. Both scientists were validated more than 40 years later with the discovery of Morgan’s sphinx moth (Xanthopan morganii praedicta), a cousin of our native white-lined sphinx moth. Thus, the plant is also known by the common name Darwin’s Orchid and the scientific name for its pollinator includes the subspecies epithet “praedicta,” a reference to Wallace’s prediction of the moth’s existence. 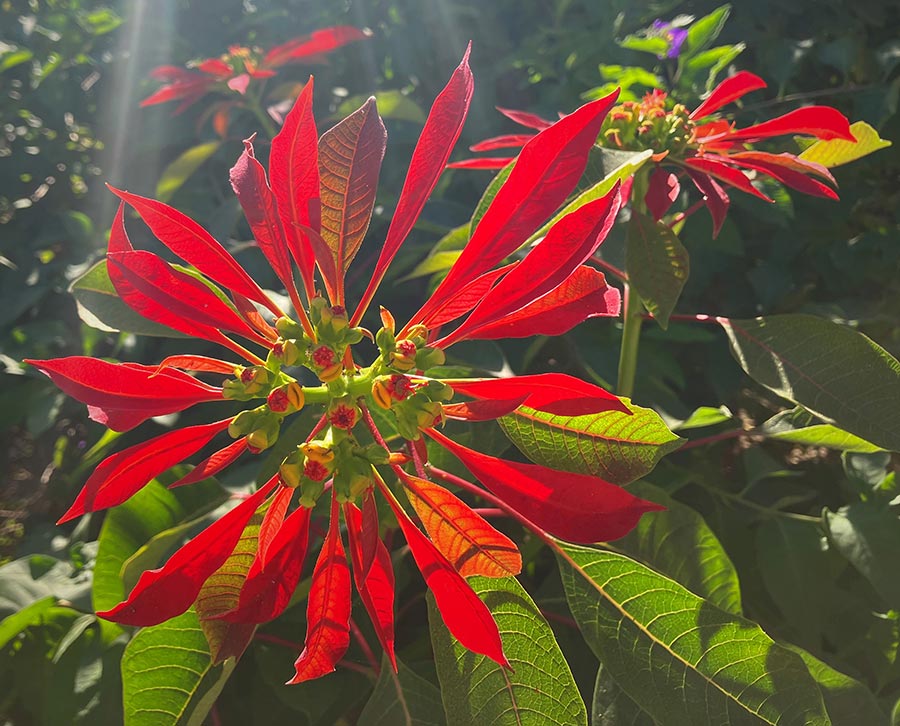 Euphorbia pulcherrima ‘St. Louis Red’ is an old cultivar of Poinsettia that can reach 8 feet in height, making it better suited for growing in garden landscapes than in pots. Photo by Sandy Masuo.

Closer to home, Euphorbia pulcherrima, popularly known as Poinsettia or Mexican Flame Flower, ignites the winter landscape with bursts of vivid red. Native to parts of southern Mexico and Guatemala, it grows in tropical dry forests that experience a climate like Southern California’s—long, hot, dry seasons punctuated by rain in late fall and winter. Indigenous people have long appreciated this member of the spurge family for various aesthetic and practical uses. The Maya and Aztecs cultivated it, and its Nahuatl name is cuetlaxochitl (kwe-tla-SHO-sheet). When Spanish colonizers arrived in the region during the 17th century, it became part of nativity celebrations because the appearance of its red blooms happened to coincide with their observance of Christmas. The bright “petals” are specialized leaves called bracts that serve as beacons, attracting nectar-feeding insects and birds to the clusters of tiny flowers at the center. The massive Euphorbia pulcherrima ‘St. Louis Red’ located off the South Terrace of the Huntington Art Gallery is decades-old and an example of a cultivated variety that is more similar in form to its shrubby, wild ancestors. 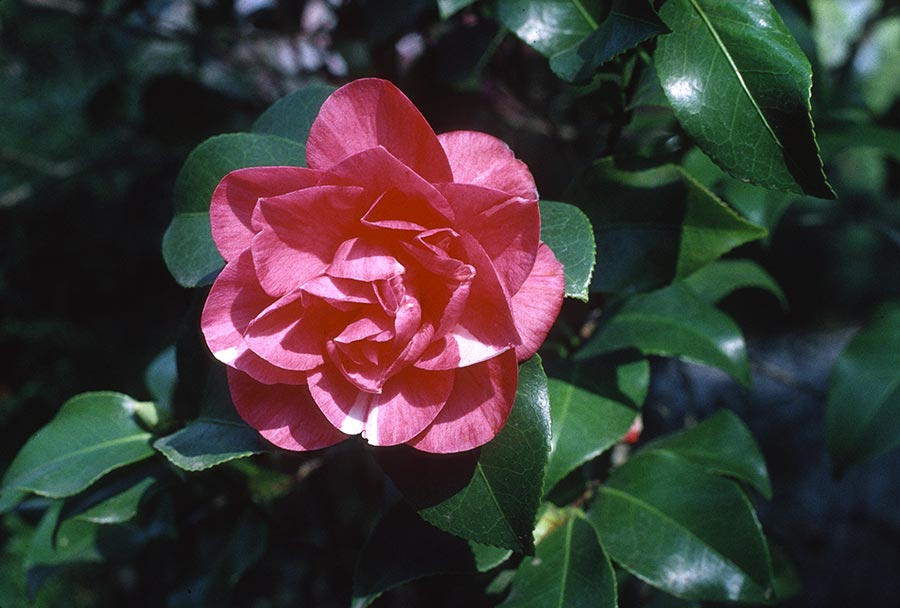 Humans have been cultivating camellias for centuries. Winter-blooming Camellia japonica is the source of countless ornamental cultivars, including C. japonica ‘Winter Cheer’. Photo by Judi Danner.

Even in temperate climate zones where winter temperatures are much colder, some plants bloom at this time of year. The wild form of Camellia japonica is native to parts of China, Korea, and Japan, where it naturally blooms between December and April. It is pollinated primarily by such birds as the Japanese white-eye (Zosterops japonica). People have cultivated winter-blooming Camellias for hundreds of years, producing many gorgeous varieties. Among those in flower at this time of year are ‘Yuletide’ and ‘Winter Cheer’. 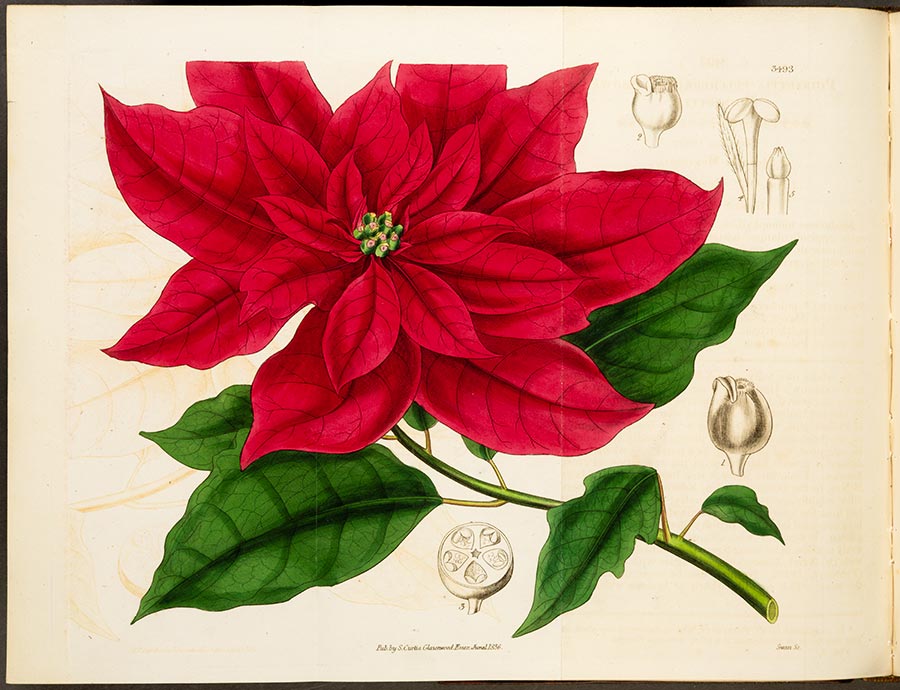 This uncredited illustration, Euphorbia pulcherrima (Showy Poinsettia), appeared in an 1836 edition of Curtis’s Botanical Magazine. In the 200 years or so since Euphorbia pulcherrima was first brought into commercial cultivation, plant breeders have developed hundreds of varieties that are smaller and hardier and produce bracts in many different colors, shapes, and textures. The Huntington Library, Art Museum, and Botanical Gardens.

In a corollary to the happy hour adage that it’s 5 o’clock somewhere, it’s always winter somewhere, and a visit to the gardens at The Huntington is a chance to sample the seasonal splendor from near and far.