NASA's "Orbit Pavilion" is an outdoor installation where captivating sounds represent the movements of the International Space Station and 19 Earth Science satellites as they orbit above. 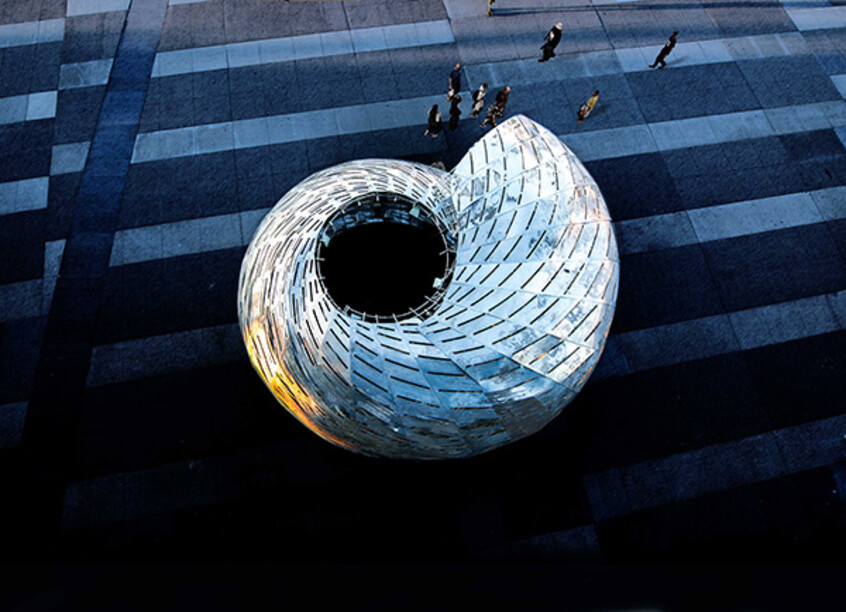 Orbit Pavilion pictured from above at the May 2015 World Science Festival at New York University. Photo courtesy NASA/JPL-Caltech 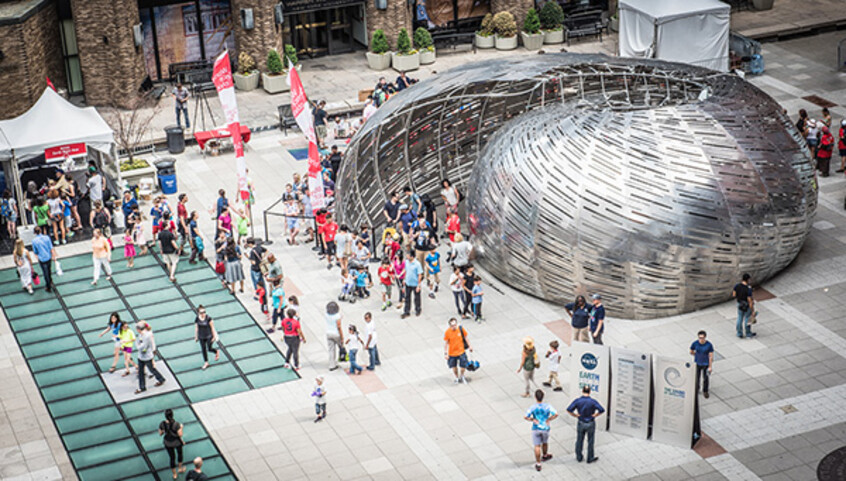 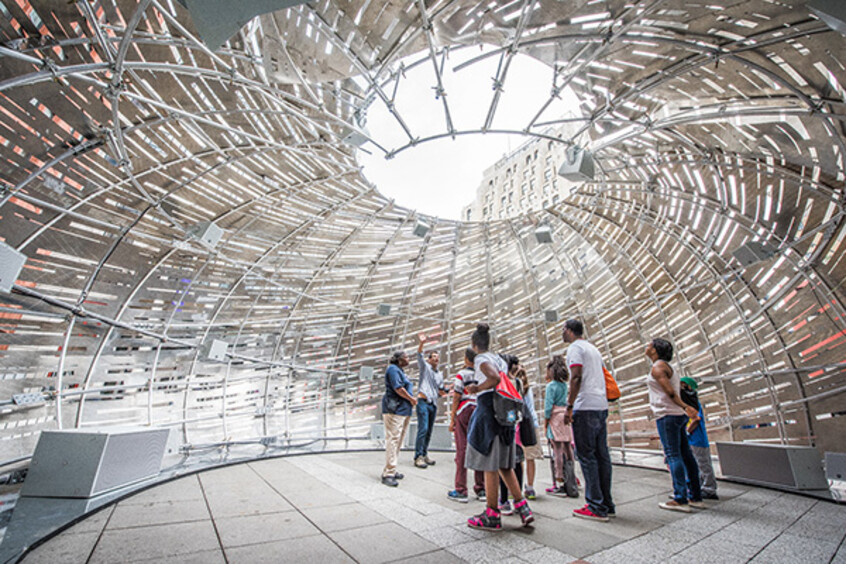 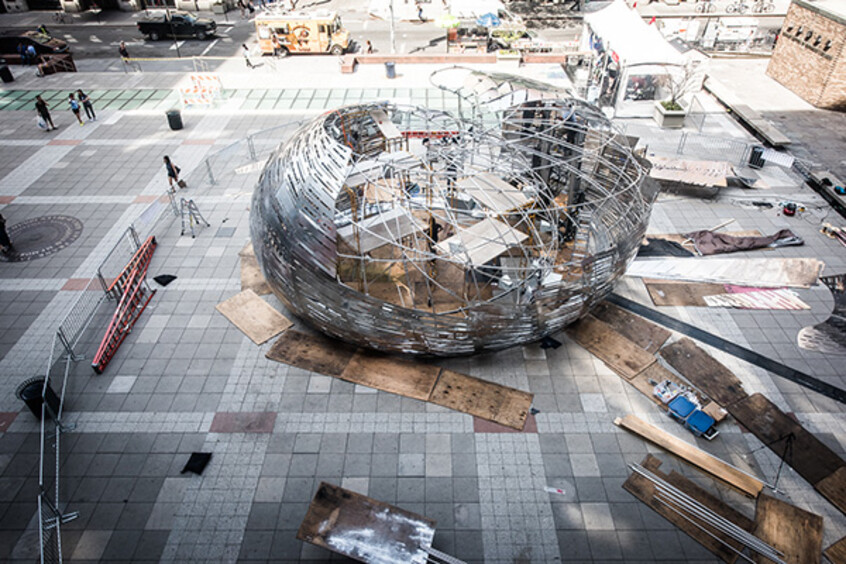 Satellites that study the Earth are passing through space continuously, collecting data on everything from hurricanes to the effects of drought. NASA's Orbit Pavilion sound experience is an outdoor installation that produces an innovative "soundscape" experience representing the movement of the International Space Station and 19 Earth Science satellites. Inside the large, shell-shaped sculpture, distinctive sounds are emitted as each satellite passes overhead: a human voice, the crashing of a wave, a tree branch moving, a frog croaking. Each sound interprets one of the satellites' missions.

Orbit Pavilion is the brainchild of Dan Goods and David Delgado, visual strategists at NASA's Jet Propulsion Laboratory who worked in collaboration with composer Shane Myrbeck and architect Jason Klimoski of StudioKCA. The exhibition inaugurates the new /five initiative at The Huntington focused on creative collaborations with other organizations. The project pairs The Huntington with five different organizations over five years, bringing in a range of contemporary artists who will respond to themes drawn from some aspect of the collections. The Library’s aerospace history holdings made this first collaboration with NASA/JPL a perfect way to launch the new initiative.

The /five initiative and the presentation of Orbit Pavilion at The Huntington are made possible by a generous gift from The Cheng Family Foundation. Additional funding for Orbit Pavilion was provided by Kim and Ginger Caldwell and the Judi and Bry Danner Fund for Presidential Initiatives.

JPL is a federally funded research center in Pasadena that carries out robotic space and earth-science missions and implements programs in planetary exploration, earth science, space-based astronomy, and technology development. JPL is managed for NASA by Caltech. The outdoor installation is the brainchild of Dan Goods and David Delgado, visual strategists at NASA’s Jet Propulsion Laboratory who worked in collaboration with composer Shane Myrbeck and architect Jason Klimoski of StudioKCA to produce the innovative “soundscape” experience.

The origin of a collaboration between The Huntington and NASA's Jet Propulsion Laboratory (JPL) stretches back almost a century. In the early 1900s, a handful of visionaries imagined Southern California as a global hub of learning across the humanities, arts, and sciences. One was Henry E. Huntington, who was developing his exceptional library. Another was solar astronomer George Ellery Hale, who played a central role in creating the California Institute of Technology. Caltech's pioneering work in rocket science would eventually lead to the creation of JPL. Hale convinced Huntington to envision his library as a nexus of research in history, literature, and art.

The Huntington Library today holds one of the largest history of science collections in North America. Highlights include Galileo's Sidereus Nuncius, which featured the first engravings of the moon peered through the newfangled telescope, and a 1923 logbook from astronomer Edwin Hubble on his observations from a telescope atop Mt. Wilson. These objects and others are on view in the permanent exhibition "Beautiful Science: Ideas That Changed the World" in The Huntington's Dibner Hall of the History of Science. The "Orbit Pavilion" at The Huntington celebrates the relationship between these two research-based institutions, the dynamic fulfillment of a vision first proposed almost 100 years ago.

Oct. 29, 2016- Ongoing, Celebration Lawn, The Huntington
Satellites that study the Earth are passing through space continuously, collecting data on everything from hurricanes to the effects of drought. The innovative “soundscape” you hear in the Orbit Pavilion represents the movement of the International Space Station and the 19 Earth satellites that investigate our oceans, atmosphere, and geology. Distinctive sounds are emitted as each satellite passes overhead: a human voice, the crashing of a wave, a tree branch moving, a frog croaking. Each sound thematically relates to the satellite it represents as a one-minute, condensed representation of each satellite's 24-hour orbit. For instance, the sound of the desert wind is used to represent the satellite CloudSat, which tracks weather clouds.

Installed nearby in The Huntington's Mapel Orientation Gallery is NASA's "Eyes on the Earth," an interactive touchscreen display with additional information about the satellites and the data they are tracking—such as sea level height or global temperature.

Dec. 13, 2016, Rothenberg Hall, The Huntington
The history of the aerospace industry in Southern California and its intersections with contemporary culture will be the focus of a panel discussion, presented in conjunction with the exhibition of NASA’s Orbit Pavilion (on view at The Huntington Oct. 29 through Feb. 27). Panelists are Peter Westwick, aerospace historian; William Deverell, director of the Huntington-USC Institute on California and the West; and Daniel Lewis, senior curator of the history of science and technology at The Huntington.

Jan. 1, 2017, Rothenberg Hall, The Huntington
The acclaimed dance company Diavolo brings its performance of Fluid Infinities to The Huntington. Set on an abstract dome structure to the music of Phillip Glass, the work explores metaphors of infinite space, continuous movement, and mankind’s voyage into the unknown. The Huntington’s outdoor installation of NASA’s Orbit Pavilion will be open prior to the program. Funding for this program is provided by the Cheng Family Foundation.

About the /five initiative
2019: Beside the Edge of the World
2019: Apariciones/Apparitions
2018: Rituals of Labor and Engagement
2017: COLLECTION/S: WCCW/five at The Huntington
2016: Orbit Pavilion