For over a century, the historic Japanese Garden has been one of the most beloved and iconic landscapes at The Huntington, with its distinctive moon bridge, picture-postcard views of koi-filled ponds and the historic Japanese House. One of the most popular spots at The Huntington, the Japanese Garden has attracted millions of visitors and remains a site of both fascination and contemplation. 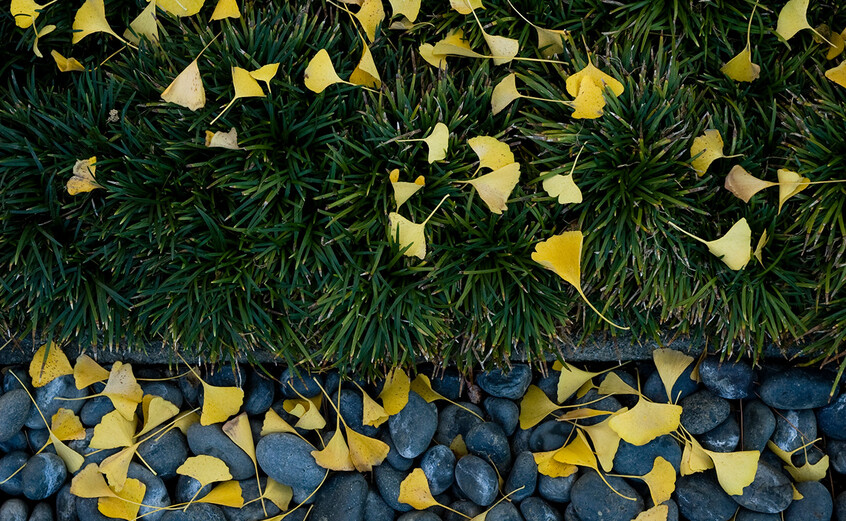 Leaves of a Ginkgo tree 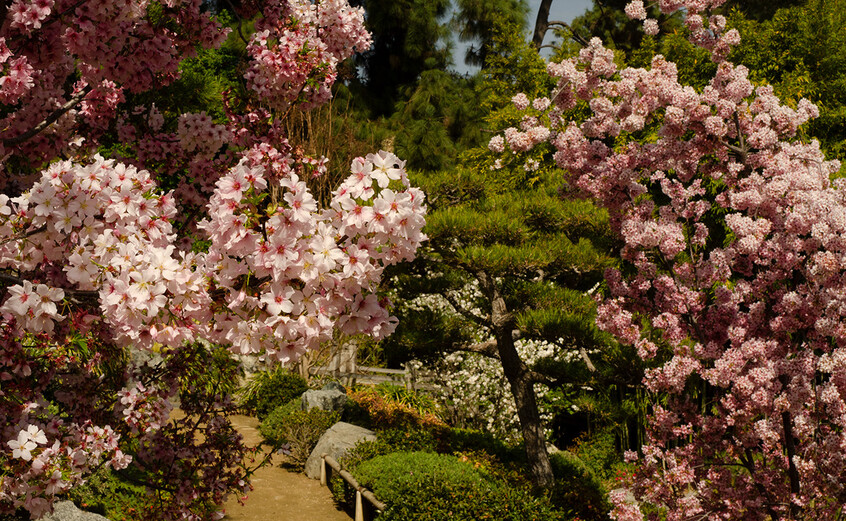 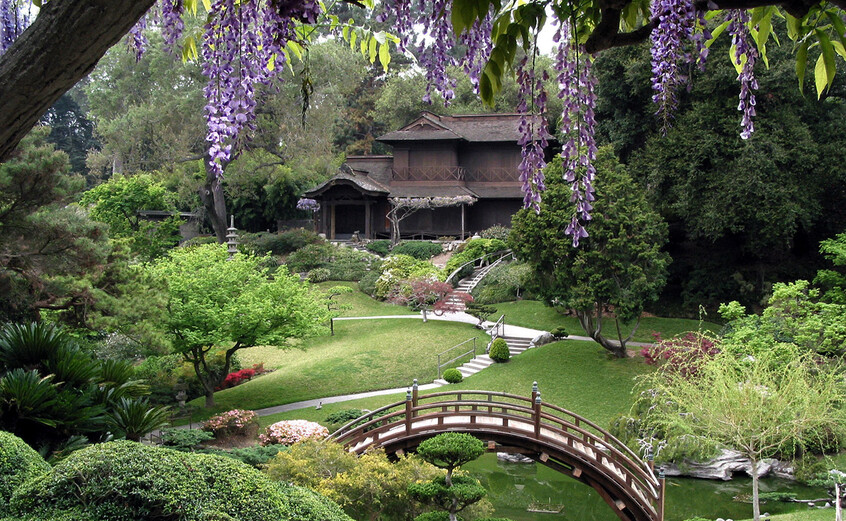 The Japanese House and drum bridge framed by Wisteria sinensis 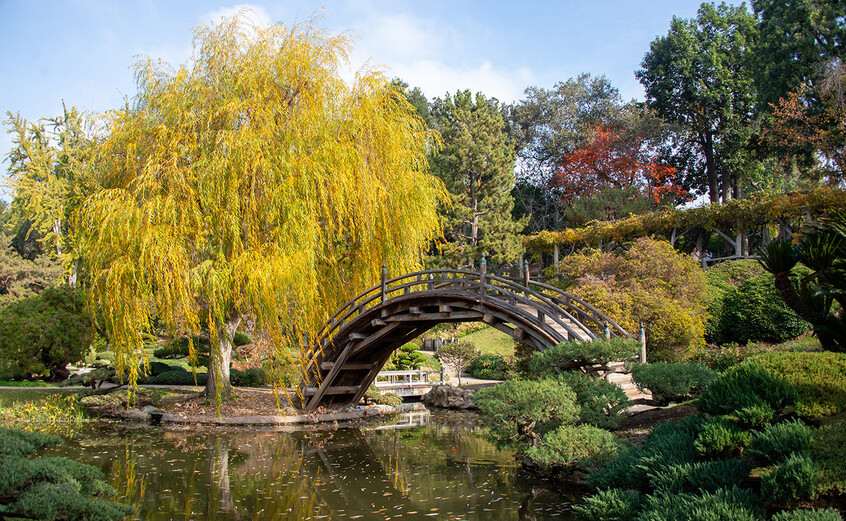 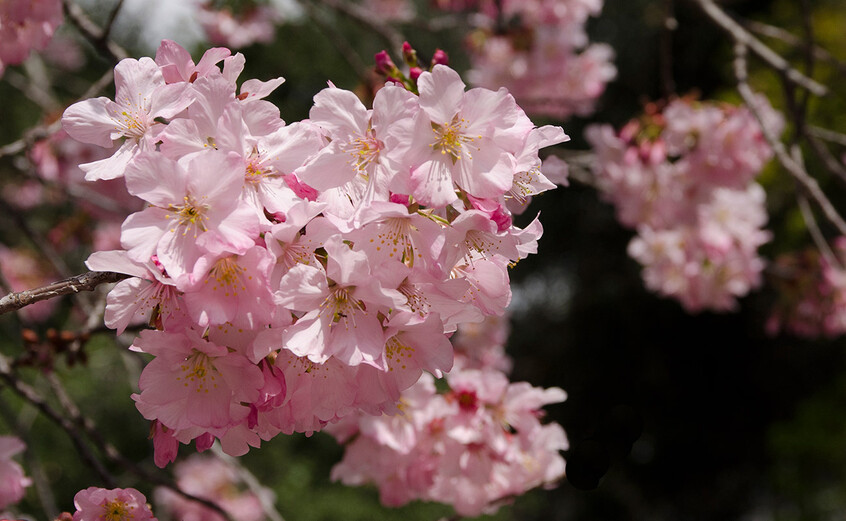 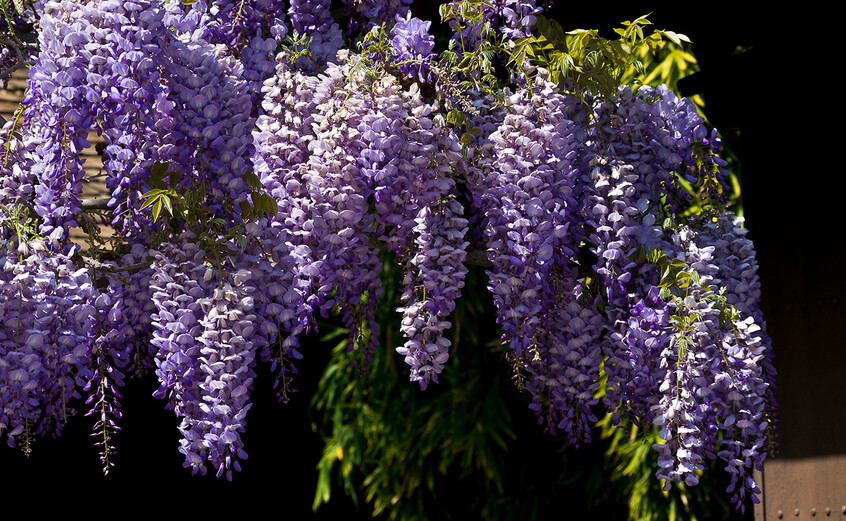 Elements of this five-room house were created in Japan and shipped to Pasadena around 1904 for a commercial garden. Acquired by Henry E. Huntington in 1911, the structure is composed of several Japanese woods, with paneled doors to the outside that can be left open or closed to allow inhabitants to enjoy the gardens around them. Inner walls can easily be moved to increase room size or privacy. During a 2011 renovation, original architectural features were discovered, such as the distinctive curves of the roof line and original plaster and wood finishes. Restored, today the structure is considered one of the best examples of early twentieth-century Japanese architecture in the United States.

The ceremonial teahouse, called Seifu-an (the Arbor of Pure Breeze), was built in Kyoto in the 1960s and donated to The Huntington by the Pasadena Buddhist Temple. In 2010, the teahouse made a return trip to Japan for restoration, overseen by Kyoto-based architect Yoshiaki Nakamura (whose father built the original structure). It was then shipped back to San Marino and painstakingly reassembled. The teahouse location within a traditionally landscaped tea garden atop a picturesque ridge provides a stunning setting for demonstrations of the traditional Japanese tea ceremony. (Unlike the tea shop in the Chinese Garden or the Rose Garden Tea Room, it does not serve refreshments.)

In 1968, The Huntington expanded the Japanese Garden to include a bonsai collection and zen court, where displays are rotated throughout the year to highlight seasonal features. Since 1990, The Huntington has served as the Southern California site for the Golden State Bonsai Federation and trees in the collection now number in the hundreds.

In the Harry Hirao Suiseki Court, visitors are invited to touch the suiseki or viewing stones, an ancient Japanese art form, while the Zen Court provides an example of the contained landscapes that once evolved in the temple gardens of Japan. Patterns raked into gravel, rock formations, and shrubbery are used to symbolize water, space, movement, and other abstract ideas.

The nine-acre Japanese Garden, completed in 1912, was inspired by widespread Western fascination with Asian culture. As was fashionable at the time, many wealthy Americans and Europeans added exotic gardens to their estates. The Japanese gardens exhibited at world’s fairs and expositions in St. Louis, Chicago, and San Francisco helped to fuel the trend. Henry E. Huntington decided to build his own Japanese garden on his San Marino estate, and acquired many of the garden’s plants and ornamental fixtures from a property in nearby Pasadena that had failed as a commercial venture. Purchased in its entirety by Huntington, the materials also included the Japanese House. The moon bridge, commissioned by Huntington, was built by Japanese craftsman Toichiro Kawai. By the advent of World War II, staffing shortages and the political climate caused the Japanese Garden to be neglected, with parts of it inaccessible to the public, and the Japanese House fell into disrepair. In the 1950s, members of the San Marino League helped support the refurbishment of the buildings and surrounding landscape.

In 2011, a team of architects with backgrounds in historic renovation, plus horticulturists, landscape architects, engineers, and Japanese craftsmen undertook a year-long, large-scale restoration of the historic core of the garden. The project included repairs to the central pond system and water infrastructure, along with increasing pathway accessibility, and renovating the original faux bois (false wood) ornamental trellises.

Major support for the Japanese Garden restoration was made possible by the Mary B. Hunt bequest, the Michael Monroe and Deane Weinberg bequest, the Ralph M. Parsons Foundation, The Rose Hills Foundation, Frank and Toshie Mosher, and an anonymous foundation. Additional support was provided by Kay and Steve Onderdonk.