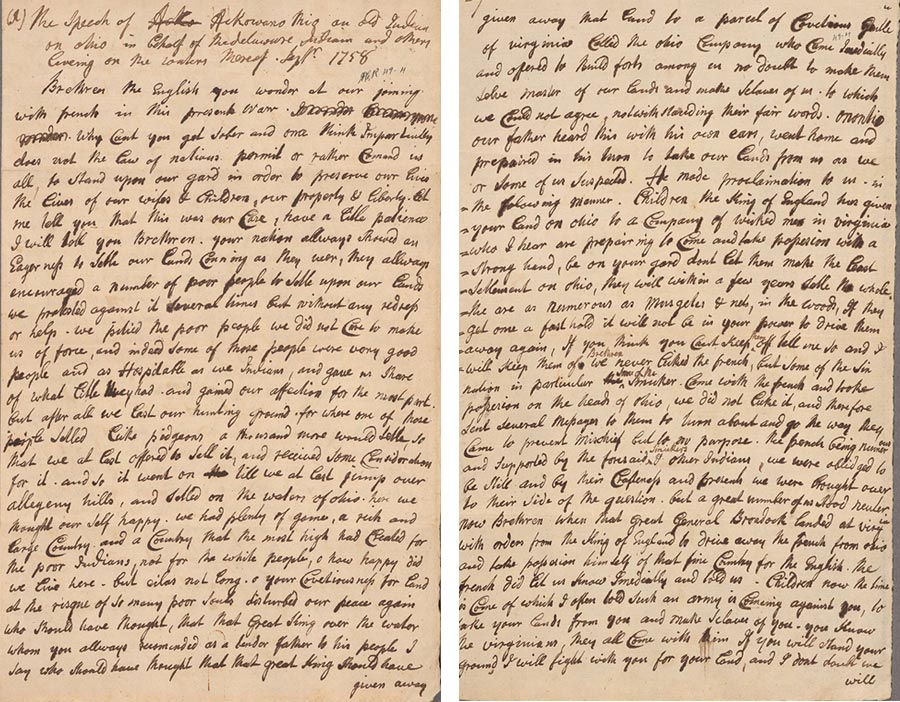 The first two pages of The Speech of Ackowanothio, September 1758. Lt. Col. Conrad Weiser (1696–1760), a veteran Indian interpreter with more than 25 years of experience, probably recorded the speech as he was translating Ackowanothio’s words, spoken in the Lenape (Delaware) language. The Huntington Library, Art Museum, and Botanical Gardens.

In September 1758, the 62-year-old Lt. Col. Conrad Weiser (1696–1760), a veteran Indian interpreter, recorded a speech delivered by a man whose name he rendered as Ackowano Thio, or Ackowanothio. The original record of the speech is now on display in the Library’s Main Exhibition Hall, next to a rare printing of the Declaration of Independence.

Weiser wrote that the man was an “an old Indian on Ohio,” most likely a Shawnee, speaking on “behalf of Delaware Indians and others living on the waters thereof” at a meeting requested by the representatives of the military governor of Pennsylvania, William Denny (1718–1762).

The conference took place at a pivotal stage of the conflict known as the French and Indian War. Long described as a war of colonial conquest that pitted France against Britain, the conflict was, in fact, a world war that involved multiple nations and empires, both European and Indigenous.

In the summer and early fall of 1758, Denny and British commander John Forbes were desperate to break up the alliance between the Shawnee and Lenape nations and the French command. The white diplomats labored to convince the Native leaders that they were being manipulated by the French while reminding them of their long history of peaceful relations with the British province.

Ackowanothio was having none of that. The history of peaceful relations was fiction; for decades, English “Covetousness” had driven his people off their land. 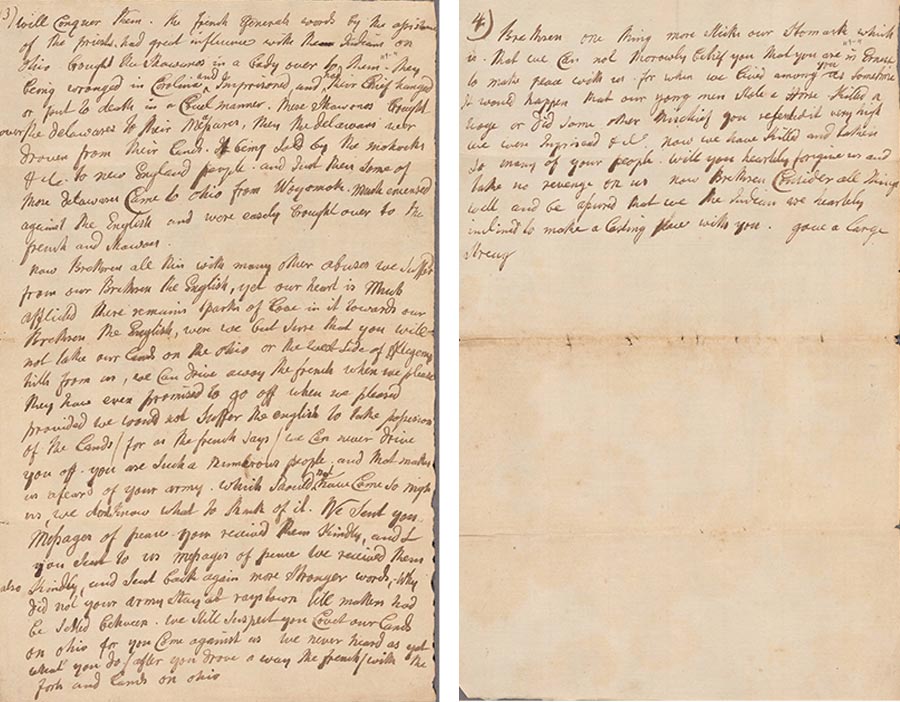 The third and fourth pages of The Speech of Ackowanothio, September 1758. Lt. Col. Conrad Weiser (1696–1760), a veteran Indian interpreter with more than 25 years of experience, probably recorded the speech as he was translating Ackowanothio’s words, spoken in the Lenape (Delaware) language. The Huntington Library, Art Museum, and Botanical Gardens.

When the first white settlers arrived, the Lenape and Shawnee men and women “pitied the poor people” who had fled their homes across the ocean. “For the most part,” Ackowanothio said, the settlers were “very good people and as Hospitable as we Indians” who “gained our affection” and never “gave us cause to use force.” They soon found out, however, that as soon as one white settler appeared on their land, a thousand more would follow “like pidgeons,” as the colonial authorities pressured the Indians to cede their ancestral “hunting grounds” until “we at last jump’d over Allegeny hills” and “settled on the water of Ohio.”

Ackowanothio aptly described the conquest by way of paperwork that turned Lenapehoking, the land of the Lenapes, into Pennsylvania. In 1681, William Penn (1641–1718) had been granted the proprietary rights to the colony that would bear his name. Penn, a pacifist Quaker, insisted that no lands be acquired by the force of arms and that all titles be properly cleared. This provision, however well intentioned, created a feel-good fantasy of Pennsylvania’s “peaceable kingdom” while opening a way to rampant fraud.

In 1735, Penn’s sons presented the Lenapes with what they said was an earlier treaty, signed by their father and the Delaware “kings,” that would entitle the sons to a tract extending “as far as a man can goe a day and half.” Having managed to convince the Lenapes that the document was genuine, the Penns hired several men who ran in a relay for 36 hours. The swindle, known as the Walking Purchase, robbed the Lenapes of a tract of land the size of Rhode Island, netting the Penns a fortune. When the Lenape leaders tried to protest, the Penns struck an alliance with the Delawares’ powerful rivals, the Iroquois, to drive them off their land to the Ohio River. The stolen land was then divided into smaller plots and sold to European and New England migrants. 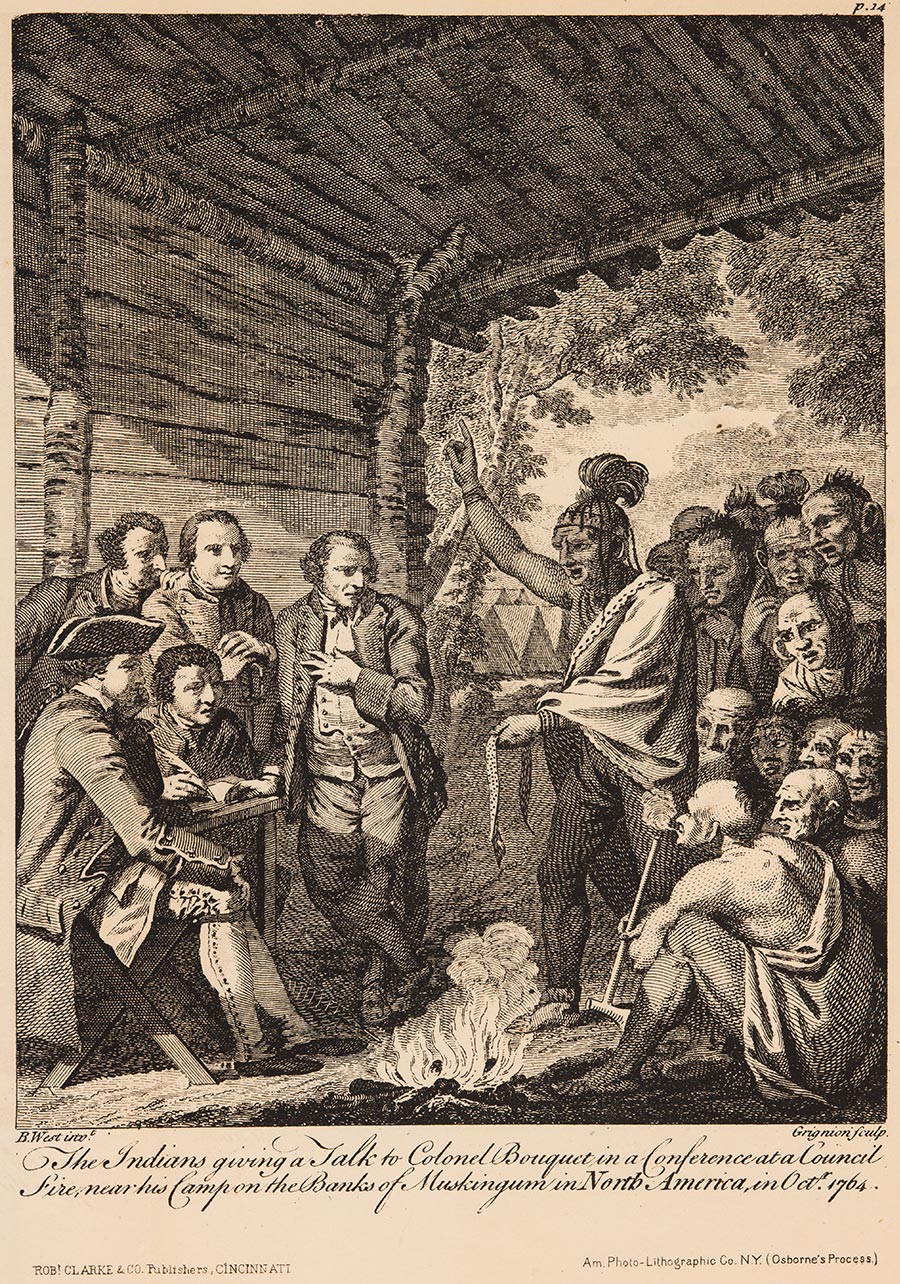 Benjamin West, The Indians Giving a Talk to Colonel Bouquet in a conference at a Council Fire Near His Camp on the Banks of Muskingum in America, in October 1764. Engraving by Charles Grignion, after Benjamin West (1738–1820). The Indian interpreter, seated on the left with quill pen in hand, served in the same capacity that Lt. Col. Conrad Weiser did when he recorded Ackowanothio’s speech. The Huntington Library, Art Museum, and Botanical Gardens.

In 1755, the Lenapes and Shawnees returned to their land, this time backed by the French army and armed with guns, tomahawks, and scalping knives. In the summer of 1756, Denny, the newly appointed military governor of the province, met with the Lenape leader Teeduyscung. Hoping to draw him to the British side, Denny promised Teeduyscung an investigation of the Walking Purchase and authorized a special committee of inquiry.

The records of the committee, acquired by The Huntington in 2020, include the final report produced in November 1757. Written by the Penn-appointed provincial secretary and attorney general, the report ruled that the Walking Purchase was valid.

Denny’s representatives most likely had very little to say in response to Ackowanothio’s declaration that if the English would “get sober” and “think Impartially,” they would see that his people’s alliance with the French was just and necessary. For, as he cried out, does “not the Law of Nations permit, or rather command us all, to stand upon our Guard in order to preserve our Lives, the Lives of our Wives and Children, our Property and Liberty?”

Historians believe that Ackowanothio died shortly after he gave this speech. A month later, the Lenape and Shawnee representatives signed on to the Treaty of Easton, pledging their support to the British. Three years later, with the British victory assured, a court of appeals refused to vacate the Walking Purchase. 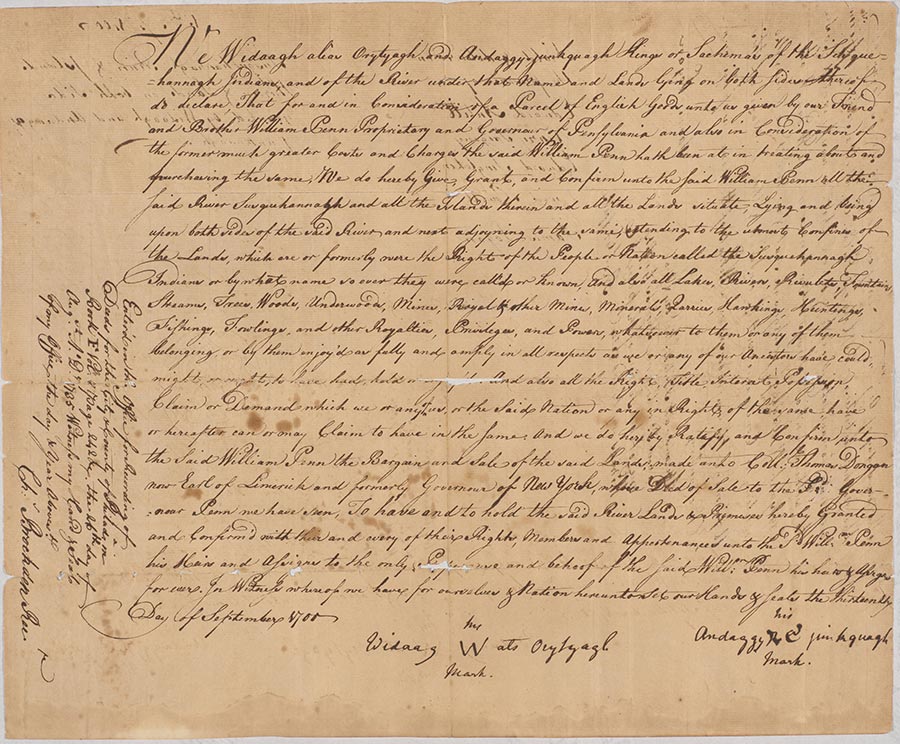 First page of the Deed for Indian lands along the Susquehannah River, signed by the Sachems of the Susquehannah River …, ca. 1757. The Penns’ defense of the validity of the Walking Purchase hinged on the authenticity of the documents that they produced in 1737. The centerpiece was an “antient”—or ancient—treaty allegedly signed in 1686 by William Penn and the “kings” of the Delawares. The original was never produced. Pennsylvania Provincial Secretary Richard Peters, beholden to the Penns, insisted that he, as the keeper of all historical records, knew that an “antient” copy of the deal was authentic. When the Lenape representatives demanded to see it in 1757, Peters produced this fake deed. Whoever manufactured it did not even bother to fill the blanks left for the date. The Huntington Library, Art Museum, and Botanical Gardens.

Two decades later, the United States of America—a sovereign nation of people that, in the words of the Declaration of Independence, was “endowed by their Creator with certain unalienable Rights” of “Life, Liberty and the pursuit of Happiness”—joined an alliance with France “against the Enterprises of their common Enemy,” Great Britain.