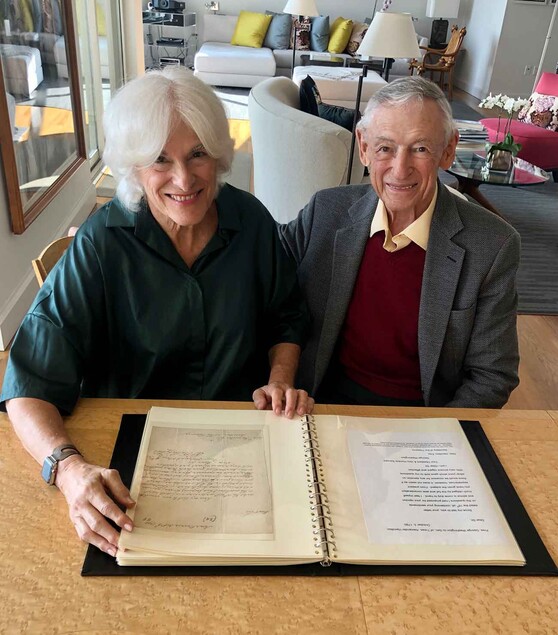 Susan R. and L. Dennis Shapiro with some of their presidential letters and related materials. 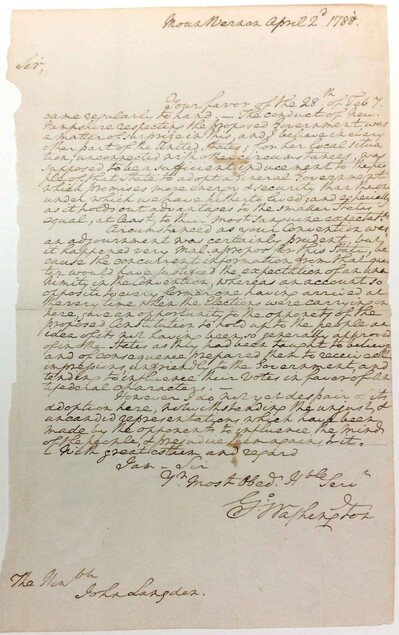 Letter from the Shapiro Collection by George Washington to John Langdon, from April 2, 1788, discussing the ratification of the U.S. Constitution.

The Huntington Library, Art Museum, and Botanical Gardens announced today that it is establishing the Shapiro Center for American History and Culture at The Huntington, thanks to a generous gift from L. Dennis and Susan R. Shapiro.

SAN MARINO, Calif.—The Huntington Library, Art Museum, and Botanical Gardens announced today that it is establishing the Shapiro Center for American History and Culture at The Huntington, thanks to a generous gift from L. Dennis and Susan R. Shapiro. Along with financial support, the Shapiros, who make their home both in Los Angeles and Boston, are donating their collection of some 340 rare items focused primarily on American presidential administrations from the 18th to the early 20th centuries. The gift includes an endowment for innovative programming and the long-term care and growth of The Huntington's premier early-American collections of rare books and manuscripts, which are unique on the West Coast.

The Shapiro Collection is particularly rich in correspondence by John Adams and his son John Quincy Adams, including dozens of Adams-related documents and letters penned by the second and sixth presidents, father and son. “I collected the Adamses,” Shapiro said, “because I personally connected with their feelings toward family and country, and felt that they were underappreciated. But the wisdom of these two men, made evident in their frequent correspondence, speaks volumes about human dignity and empathy and the deep connection between them.” The collection includes, as well, a rich trove of material from Albert Gallatin, secretary of the treasury under Presidents Thomas Jefferson and James Madison. Presidential spouses are also represented, including letters by Dolley Madison and Abigail Adams.

The Huntington is known for its substantial collections in American history and has long been a center of research for American historians, some of whom have written prize-winning and other critically acclaimed works based on The Huntington’s rare materials ranging from the colonial period to the Civil War and beyond. Alan Taylor won the Pulitzer prize for The Internal Enemy: Slavery and War in Virginia, 1772–1832 (2014), and Anne Hyde was awarded the Bancroft Prize for Empires, Nations and Families: A New History of the North American West, 1800-1860 (2012); both were researched at The Huntington. Civil War historians have also credited The Huntington for providing source material and space for the research they conducted for their award-winning books: James McPherson won the Pulitzer for Battle Cry of Freedom: The Civil War Era (1989), and David Blight was awarded both the Pulitzer and the Bancroft Prizes for his biography Frederick Douglass: Prophet of Freedom (2018).

“This generous gift from the Shapiros comes at a significant moment during our yearlong Centennial celebration, highlighting and expanding American historical material collected by Henry E. Huntington himself,” said Karen R. Lawrence, president of The Huntington. “It is a transformative gift that allows us to spotlight our materials from the early republic as never before, provide greater scholarly and public access, and encourage reflection on the relevance of the country’s founding ideas for an increasingly diverse America.”

The Huntington is home to hundreds of archival collections and more than 200,000 individual manuscripts, rare books, prints, photographs, and ephemera documenting the history of the United States, with special strengths in the American Revolution and the early republic, the antebellum decades, the Civil War, Reconstruction, and beyond. “But, like many research libraries, only a fraction of it is discoverable online,” said Sandra L. Brooke, Avery Director of the Library. “The Shapiro gift will help provide much wider online access to these important materials and further inform our research and education offerings as we push forward to make them as accessible as possible.”

The Center will not be a bricks-and-mortar facility, said Brooke. Rather, it will be program-oriented, with initiatives that will include lectures, fellowships, exhibitions, and publications, as well as a robust online presence.

Importantly, the gift will fund a biennial book prize, the first to be offered by The Huntington, for a first scholarly monograph in American history and culture. The Shapiro Prize will focus on books that make exceptional use of primary source materials, especially documentary collections. The inaugural prize, which will carry with it a $10,000 cash award, is targeted for 2021.

The Center will also serve as a fulcrum for studying the history of collecting American documentary materials by periodically bringing together scholars, collectors, and librarians to advance knowledge in the field, said Olga Tsapina, Norris Foundation Curator for American History. “It’s an area of study we are only just beginning to explore,” she said. “Like Henry Huntington before him, Dennis Shapiro is a successful businessman, keenly interested in American history, and discerning about the materials he assembled. In Huntington’s case, he purchased whole collections that reflect what a particular person was interested in. Shapiro’s collection was primarily personally assembled, item by item. Collections are a lot like snowflakes—they look structurally the same in many ways, but each is unique and fascinating.”

Moreover, said Tsapina, with so much focus today on the Constitution and the turmoil in Washington, D.C., there is increased interest in American history, the founding documents, and more. “People are hungering for deeper understanding and insight. These are the types of historical treasures that can provide for those types of insightful moments.”

The Center will also fund two new fellowships for researchers working on topics in American history and culture. While fellowships currently are offered in this area, the additional support will expand the number of awards made each year.

The Shapiros and their collection
L. Dennis Shapiro is an electronics engineer and inventor credited with helping to pioneer the personal response industry that allows millions of elderly and disabled individuals to live independent lives. He was chair for 28 years and CEO for 10 years of Lifeline Systems Inc., later acquired by Royal Philips Electronics. His wife Susan is a retired partner at the law firm Ropes & Gray, LLP.

“I have a collecting gene,” Shapiro admitted. “I collected stamps as a kid. I liked the idea of having things with a history. As a company president, I felt a bond with other presidents who all knew too well, as Harry Truman liked to say, ‘The buck stops here.’”

But the initial purchase, Susan Shapiro said, was her doing. “He’s impossible to buy for when it comes to birthday gifts,” she said, recalling that when he mentioned to her in 1985 that he had seen presidential correspondence in a Boston antiquarian bookstore that piqued his interest, she quietly made a surprise purchase. The rest, as they say, is history. In purchasing historical documents, Shapiro delves deeply into the context of the correspondence: How does a particular document embody the writer’s decision-making and motives? How does it elucidate what was happening in the wider world?

Background
Henry E. Huntington laid the foundation for the institution’s American history collections in 1911 when he purchased the Elihu Dwight Church library, which contained such gems as the Book of the General Lawes and Libertyes of Massachusetts (1648) and the holograph manuscript of the Autobiography of Benjamin Franklin. Subsequent acquisitions—most notably in the collections of Robert Hoe and William K. Bixby—ensured The Huntington's status as one of the nation's leading repositories for historical Americana.

The Library is famous for its collections related to the nation’s founders, especially the papers of George Washington and Thomas Jefferson. The extensive archives of John Campbell, 4th Earl of Loudoun, the commander of the British forces in America between 1756 and 1758, and of his successor, James Abercromby, provide rich resources for the history of British and French America in the 18th century. A large collection by renowned Virginia collector Robert A. Brock documents three centuries of the history of the American South.

The Library holds a massive Abraham Lincoln collection, including the papers of his cabinet members, friends, and adversaries; numerous letters, diaries, and memoirs of Union and Confederate soldiers; and the recently acquired archives of the U. S. Military Telegraph.